The Corning of Beef

My first experience with corned beef was as a teenager in New York; going to a Jewish deli for, what else, a corned beef on rye with spicy brown mustard. Then came the Reuben; corned beef on grilled rye with Swiss cheese, sauerkraut and Thousand Island dressing. As an adult I discovered corned beef and hash for breakfast; chopped up corned beef heated up on a flat top grill with diced potatoes, sometimes diced peppers thrown in.

No, I'm not a novice to the corning of the beef, but what exactly does that mean, corned beef I mean.  In age old England, grain was called corn; but the discovery and exploration of America introduced the English to a Native American staple which the English settlers named corn.  This "grain" was nothing like the wheat or rye which grew in the homeland; this grain prospered on a tall stalk and had many "ears".  Cooked on its own, it tasted pretty good, but dried and ground up into flour; even better

So back to corning beef though; how did the process of pickling or curing beef come to be called "corning"?  Well, perhaps it was that corn became a major feed source for cattle; cattle ate the corn, so they, themselves, became corned.  When I lived in Lancaster, PA, one of the major crops grown was corn; the other was tobacco.  Most of the crops were harvested and stored as cattle feed; some was sold at the local markets for human consumption.  Those were the days; going to the local markets with paper or plastic bags to fill; 13 ears, a baker's dozen, for only one dollar.

Sorry to keep digressing like this; corned beef refers to "corns" of salt, salt being the major ingredient in the pickling or curing of meat.  It basically comes from an intertwining of languages and cultures to what we know now.  Therefore, depending on which culture you want to rely on will give you the pickling spice recipe and technique to use.  Another ingredient used is either saltpeter (potassium nitrite) or pink salt (sodium nitrite); either of these is a chemical agent which interacts with the meat, giving the meat its red coloring.  You don't have to use either, but then the meat will come out of the pickling process with a sickly grayish coloring; not appetizing to look at.  These ingredients can be found in supermarkets in the home canning aisle, as well as farm/country stores.

The recipe I'm going to post for you here comes from Alton Brown, one of the popular chefs and hosts of Food Network Channel.  On a 2007 episode of his show, "Good Eats" called, what else, "Corn the Beef"; Alton gives you the low down on making corned beef.  By the way, this method can also be used with wild game such as deer (venison) or elk; there's a little tip for our hunter friends.

Place the water into a large 6 to 8 quart stockpot along with salt, sugar, saltpeter, cinnamon stick, mustard seeds, peppercorns, cloves, allspice, juniper berries, bay leaves and ginger. Cook over high heat until the salt and sugar have dissolved. Remove from the heat and add the ice. Stir until the ice has melted. If necessary, place the brine into the refrigerator until it reaches a temperature of 45 degrees F. Once it has cooled, place the brisket in a 2-gallon zip top bag and add the brine. Seal and lay flat inside a container, cover and place in the refrigerator for 10 days. Check daily to make sure the beef is completely submerged and stir the brine.

After 10 days, remove from the brine and rinse well under cool water. Place the brisket into a pot just large enough to hold the meat, add the onion, carrot and celery and cover with water by 1-inch. Set over high heat and bring to a boil. Reduce the heat to low, cover and gently simmer for 2 1/2 to 3 hours or until the meat is fork tender. Remove from the pot and thinly slice across the grain.

Now for a quick and easy breakfast item made with corned beef...Corned Beef and Hash.  You have two options here, the seriously easy way is to use 2 cups of defrosted O'Brien potatoes from a package; the potatoes, onions and peppers are already diced and mixed up for you.  Or you can go the strictly fresh route which is the one I'll be posting for you. 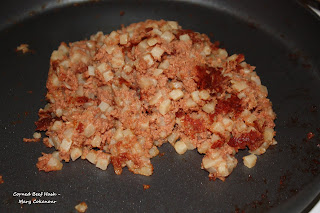 Corned Beef and Hash
Ingredients:
3 Tbsp butter
1 cup diced onion
1/2 cup diced bell peppers (green or green/red combination)
2 cups diced potatoes, previously boiled until fork tender
2 cups chopped corned beef
salt and ground black pepper to taste
Preparation:
In a large skillet, medium-high heat, melt butter; saute' onion and bell peppers together until onions are translucent.  Mix in potatoes and corned beef; press mixture down onto skillet with spatula and let brown.  If needed, add more butter to keep from sticking to skillet.  Carefully use spatula to peek underneath mixture; if browned, flip over and press mixture down again....do not stir!  Let other side brown, use more butter if necessary.
Add salt and ground black pepper if necessary.
Makes 4 servings.
Note:  Each serving goes great with two eggs either over easy or sunny side up.
Mary Cokenour
﻿

Posted by Mary Cokenour at 6:21 AM 0 comments