Being in the mood for a bacon and egg breakfast for the weekend, I pulled the thick cut maple bacon out of the freezer for defrosting. At the same time, I pulled out a package of lean ground beef to make meatloaf for dinner.

After getting home from work, it was just one thing after another; them came the time to make dinner. Looking at the ground beef, I started to reconsider making the meatloaf and I thought of other recipes. I really like those Tamale Stuffed Peppers, but alas, no fresh peppers in the fridge. I could make my Mexican Shepherd's Pie; very similar to the stuffed peppers, but as a casserole. Heh; I spotted the now defrosted bacon, a picture formed in my mind and I decided, "why not!?!" 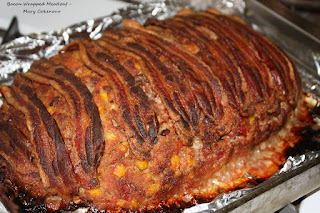 That's right, Bacon Wrapped Meatloaf and I used many of the ingredients from the Tamale Stuffed Peppers to give an extra Mexican twist. Hey, if I can put bacon into or on top of cupcakes, why not a meatloaf? ...and so it began. 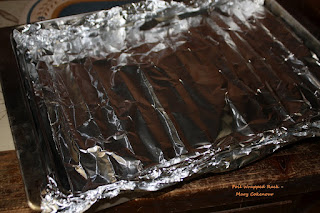 Now the first major decision I made was to use a roasting pan with a rack instead of a baking dish. I lined the pan with aluminum foil, inserted the rack, but also put a sheet of foil over the rack. I pricked a few holes here and there on the sheet to allow any excess oil to drip through; the meatloaf wouldn't absorb the excess oil or cook in it and burn the bottom.  The foil also kept the meat mixture from dropping through and falling apart. 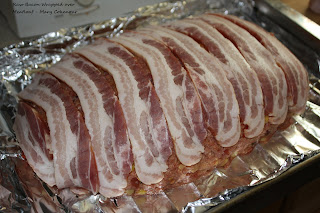 Second decision was to trim the slices of bacon and not tuck them under the meat mixture. I felt that being hidden from the heat would keep them undercooked and I wanted the bacon crispy. 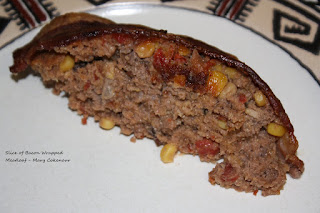 The bacon added moisture to the lean ground beef, cut easily without crumbling and did not stick to the foil at all. Every bite was infused with the maple flavor of the bacon; but after swallowing a strong bacon flavor coated the tongue. You were still able to experience the flavors of the Mexican ingredients too. As a garnish, some cool, freshly made salsa was just right.