So there I was one day, staring at a London Broil and bag of potatoes, "Ho Hum" I thought, "I don't want to do this the same way again".  I went on Facebook to waste some time when I saw a notification from My Big Fat Greek Restaurant, and I remembered their most delicious Gyros and Lemon Potatoes. Being about 2 and 1/2 hours away from home though, as much as I wanted a repeat of that meal, I didn't want to drive all that way and then back. Oh, but then the inspiration hit me; I might not be able to make Gyro meat, but I can make those potatoes! I opened up my Mediterranean cookbooks, and looked online, for any Greek inspired meat recipes.

Essentially I came up with a roasted London Broil to die for, a Greek style "salsa" as a side dish for the meat, and the lemon-parsley potatoes with a Parmesan cheese crust...yeah, it was all so good. 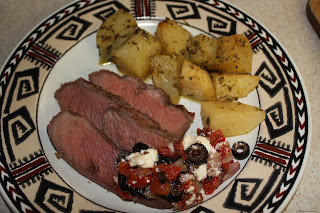 Greek Inspired London Broil
Ingredients:
1 tsp crushed dried basil, divided in half
1 tsp crushed dried oregano, divided in half
1 Tbsp minced garlic
1/4 cup olive oil
1/4 cup red wine vinegar
3 Tbsp fresh lemon juice
2 lb London broil, trimmed of fat
1 cup diced Roma tomatoes
1 large shallot, diced
1/2 cup sliced Kalamata olives
1/4 cup crumbled feta cheese
Preparation:
In a small bowl, whisk together half each of basil and oregano; the garlic, olive oil, vinegar and lemon juice.  Before placing the meat inside a resealable plastic bag, lightly score both sides with a sharp knife diagonally against the grain.  This will allow the marinade to seep more easily into the meat, and can be used as a guide for slicing later on.  Pour the marinade over the meat, massage it onto the meat, seal the bag and refrigerate for two hours; after one hour, turn bag over.
﻿

Also after one hour, prepare the "salsa" by lightly combining the tomatoes, shallot, olives and remaining half teaspoon of the basil and oregano; cover with plastic wrap and refrigerate.   Add the feta cheese to the mixture just before serving with the meat and potatoes. 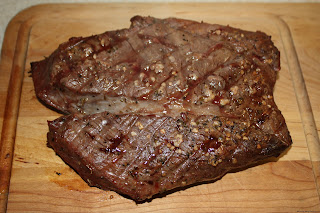 Line a roasting pan with aluminum foil, spray the rack with nonstick spray and insert into the pan.  Take the meat out of the bag (discard the bag and excess marinade), place on the rack and place the pan on the center rack inside the oven.  After 20 minutes, turn the roast over; after 15 minutes the meat will be rare, 20 minutes for medium-rare.  Remove to a cutting board and let it rest for 5-7 minutes to allow its juices to settle within itself before slicing;  slice against the grain and thinly.  Serve with the Greek "salsa".

There you have it, my Greek Inspired London Broil and Lemon-Parsley Potatoes with a Parmesan Cheese Crust.  Believe me, the leftovers did not last very long.  Enjoy!