In Roman mythology, a pair of twin boys were placed into a basket, set upon the Tiber River, found by a she-wolf and eventually raised by a shepherd and his wife.  The two adult brothers could not agree upon which hill to build their city, held a bird watching contest to decide, and yet still remained at a standstill.  Romulus began building his city on Palatine Hill, and Remus, who was quite the brat, would mock Romulus’ efforts.  One day, Remus decided to jump over a wall his brother had built, and fell to his death.  Now was this punishment from the Gods, or did Romulus, having run out of patience, simply murder his own brother?  In reading the variations of the tale of Romulus and Remus, one will find very many similarities to stories within the Old Testament.

Rome was the city that Romulus built, and named after himself; he was king of course.  Around 750 BCE, the Romulus calendar was created, having only ten months, running from March to December.  December has its root beginning from the Latin “decem” which means ten; all the days of winter resided in this month as well.   Now hold on a moment, take into consideration that the Covid-19 pandemic did not officially escalate until March 2020.  Here we are in December 2020, and it is as if the virus is following the Romulus calendar itself.

Anyway, in 45 BCE, Julius Caesar ordered a calendar consisting of twelve months and based upon a solar year. This calendar utilized a cycle of three years of 365 days; followed by a fourth of 366 days, aka Leap Year.  Naming it the “Julian Calendar”, Caesar moved the beginning from March 1st to January 1st.

Now I know there has been many a debate of when Jesus Christ was actually born.  However, Roman Christian historian Sextus Julius Africanus, using the Romulus calendar, dated Jesus' conception to March 25th (the same date he believed God created the world), which, after nine months in his mother's womb, would result in a December 25th birth.  Using the Julian calendar though, presuming the conception was January 25th, that would push Jesus’ birthday up to September 25th.

December is a month full of holidays (Yule, Christmas, Kwanzaa, Hanukkah, Boxing Day and Omisoka; just to name a few) which have a main focus upon peace and love.  Two facets that this entire world needs a whole lot of, especially after the debacle of the previous eleven months.  Let’s make a deal, instead of focusing on which holiday is the “correct” one for the month of December; let’s just focus on peace and love.  Anyone have an issue with that?  Please be quiet, no one really wants to know what a meanie you truly are.

Now, since I started off talking about Roman mythology, how about I continue with some Italian cuisine.  In November, the United States celebrates Thanksgiving with the traditional feast consisting of a cooked turkey.  Now leftovers are also a tradition of this holiday feast, so what to do with them?

New story.  Tetrazzini is strictly Italian, that is if you are the opera singer Luisa Tetrazzini who had a recipe created for her back in the early 1900's.  While Tetrazzini enjoyed a lavish career from 1890 to 1920; her life ended in poor health and poverty.  Now two sources claim to be the creators of this recipe named after the famous opera star, the Palace Hotel in San Francisco, CA and the Knickerbocker Hotel in New York, NY.  Just another version of the West coast versus the East coast; but whoever invented it, I bet, did not foresee the casserole becoming such a hit with the home cook.

Basically, Tetrazzini is a casserole made with some type of cooked poultry, canned tuna or raw shrimp which is mixed with diced vegetables, cooked spaghetti and baked together in a luscious, buttery cream sauce.  It is one of those recipes that can incorporate all the food groups in one sitting; if you add diced tomatoes, well there is your fruit group right there.  One thing I know for certain, there will be no leftovers for this casserole. 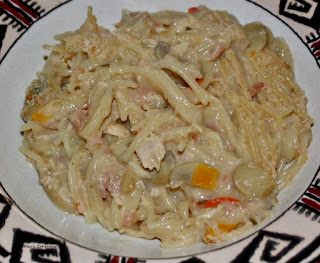 Make a roux by melting 3 Tbsp. butter, on high heat in a large saucepan; whisk in flour until smooth. It is important to keep whisking, or roux will burn; and the process will have to be started over. Continue whisking while adding chicken broth; sauce will thicken. Whisk in cream, sherry, cheese and black pepper; remove from heat when mixture is smooth.

In a small nonstick skillet, on high heat, melt 2 Tbsp. butter; sauté mushrooms and onions until softened; about three minutes.