This corner eatery is located in an adobe style building and the decor inside is Southwestern; not what one would expect in an Italian restaurant.  The seating area is small with a bar taking up one wall; ceiling fans circulate the cool air much wanted in the hot Moab area.  We were greeted by Roy, who came to be our waiter; he took our drink order and we then looked over the menu of offered Italian specialties.

Now back in 2008, while visiting Moab, we had eaten at Cassano's, tried the Pizza Margherita and Jersey Calzone and both were done very well...very close to what you would expect to find in an authentic New York pizzeria.  Since we now live in the area and were in the mood for pizza, we decided to once again visit Cassano's.  We ordered a large with meatballs and Roma tomatoes (15" for $19.99). 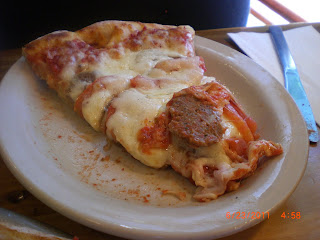 Unfortunately the goodness we expected was not to be this time. The crust on the pizza, while crispy was barely browned and very difficult to cut. The thick layer of cheese was not completely melted; the tomatoes and meatballs under the cheese were barely warm. My husband and I are still debating on whether the meatballs were freshly made on the premises, as Cassano's states they are. He felt that they used fresh bread and meat, but made them in a mixer instead of by hand. The ingredients were so fine and compacted that they did not crumble when sliced. I felt they were the typical frozen meatballs you can find in a supermarket freezer as they had a gritty texture and off taste, as if preservatives were used in their making.

We conducted two tests at home which the pizza failed. First, the cold pizza test: crust was very tough and the overall taste was not pleasant. Second test was reheating a slice in the oven; while the crust did get golden brown, it was even tougher and very difficult to bite into.

Roy, the waiter, told us the chef was Sicilian and had been experimenting on new desserts. We tried the Blood Orange Creamsicle Cheesecake and the Cannolis. 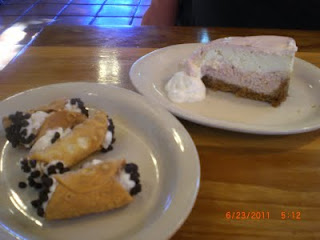 The Cheesecake was pretty, but nothing to brag about. After the bite you definitely tasted cheesecake, regular cheesecake and then, eventually, a hint of orange flavor. The Cannolis were, in one word, nasty. I believe the chef was trying to imitate traditional Cassata cream filling (made with ricotta cheese), but the filling was lumpy, dry and very, very bitter. I tried to get details of what ingredients were in the filling, but was only told "ricotta cheese".

Overall, it was not a very enjoyable meal, and with the many restaurants in the Moab area, we won't be trying Cassano's again any time soon.