Aren’t we all a little obsessive-compulsive?

Think about your day; all the habits and rituals you feel the need to do each morning, afternoon and evening. Whether you chose to create your life this way, or outside factors helped to create it; we all experience it.

The Encyclopedia of Mental Disorders defines Obsessive-Compulsive Disorder (OCD) as an anxiety disorder marked by the recurrence of intrusive or disturbing thoughts, impulses, images or ideas (obsessions) accompanied by repeated attempts to suppress these thoughts through the performance of certain irrational and ritualistic behaviors or mental acts (compulsions). The obsessions and compulsions take up large amounts of the patient's time (an hour or longer every day) and usually cause significant emotional distress for the patient and difficulties in his or her relationships with others.

However, OCD should not be confused with Obsessive-Compulsive Personality Disorder even though the two disorders have similar names. Obsessive-compulsive personality disorder is not characterized by the presence of obsessions and compulsions; rather, it is a lifelong pattern of insistence on control, orderliness, and perfection that begins no later than the early adult years. It is possible, however, for a person to have both disorders.

So, we’re either OCD or OCPD, or both; lovely, why not throw a little more confusion into our lives? No wonder so many people are on some sort of medication to help them deal with everyday life in general.

This relates to cooking how you may ask; well I’m going to tell you. Take, for example, the simple sandwich: 2 slices of some sort of bread (toasted, grilled or left soft), layers of meat, cheese and vegetables; perhaps a condiment or two. The contents might be warmed up, but usually they’re cold. Basically constructed the same exact way every time, picked up and eaten with the hands…sounds boring, doesn’t it?

So, break routine; no, no, no, don’t give up sandwiches altogether, just think up ways of making them different, more exciting. Go messy and don’t worry about the neatness factor. Eat it with a knife and fork if you really, really have to, but try being daring, pick it up and make a total mess…your mouth and stomach will thank you for it. 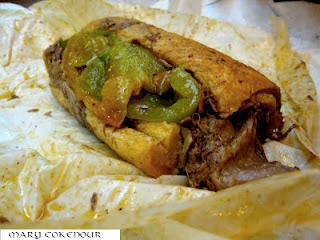 In a medium skillet, high heat, sear all sides and ends of the beef; remove beef to 4 qt crock pot; set on low heat. Deglaze skillet with wine and ½ cup beef broth; scrape up any stuck bits into the liquid; pour over beef in crock pot. Add remaining broth, garlic, pepper flakes, bell pepper and onion.

Let cook for 6 hours; remove beef to carving board and let rest for 10 minutes. Slice beef into ¼” slices.

To make sandwich, dip top and bottom halves of bread into crock pot liquid to let bread absorb flavorful, beefy liquid; place on plate. Layer slices of beef on bottom bread half; top with peppers and onions, top with other half.