Paella, the Party in the Pot.

Originating in Valencia, on the eastern coast of Spain, Paella can indeed be considered a party in a pot; everything and anything can be invited into this dish. Recipes from olden times list rabbit, chicken, snails and beans; it was the Arabic influence which introduced rice and spices, like saffron, into the party mix. As more and more outside influences entered Spain, the recipes for Paella became varied.

When making Paella, the most important element is the rice; Spanish rice is perfect, but not available everywhere. A short grain rice is the best substitute, like Arborio rice which is used in Risotto making. The Spanish or short grain rice absorb large amounts of liquid, but does not become mushy; on the contrary, it becomes plump and tender. The liquid used is also an important factor as it, not only cooks the rice, but adds flavor to the entire dish. Fish stock is the number one liquid used and usually freshly made; chicken stock is second, especially in regions where seafood is not plentiful or readily available. Depending on the recipe used, sometimes the pan is left on the burner long enough for the bottom layer of rice to toast before serving.

Adding some heat to the dish can be achieved two ways, using chile peppers or, as a meat component, a spicy sausage such as Chorizo. If using sausage, be careful of the seasonings that might be in the meat mixture to make sure it doesn't clash with the overall dish. Saffron, the stigmas of the Saffron Crocus flower, gives food a yellow-orange coloring; the taste is similar to a grassy honey. Just a pinch goes a long way and good thing too as this spice is expensive due to limited availability. 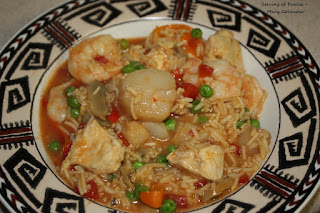 When using seafood in your Paella, stick to species that will cook well together time wise, and hold up well in structure, not fall apart. Shrimp, scallop, squid, octopus and firm white flesh fish such as cod or halibut are examples. Clams, mussels and oysters are also perfect for a seafood or varied Paella. How many of these elements you incorporate into your recipe is up to you. I wanted a simplified version, so used only three proteins; shrimp, scallops and chicken. I only used 12 ounces of each; always try to use equal amounts of the proteins and adjust accordingly to accommodate the size of your pan. While I used a short grained rice, I made the mistake of not checking the rice to liquid ratio on the package; some have a one to two ratio, some have a one to three ratio.  It was slightly soupy, but still delicious; the extra liquid did absorb well when leftovers were reheated the next day. 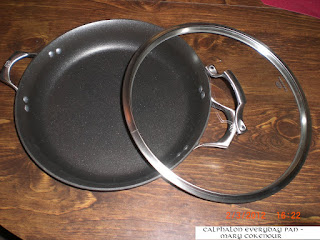 A Paella pan looks similar to a giant Wok, but with lower sides and a larger, flat base to sit on the fire. Like the Wok, it distributes the heat evenly to ensure proper cooking of all ingredients without having to worry about overcooking or burning. I used my Calphalon Everyday Pan to make my Paella. With all the ingredients I managed to put into the pan, it did not boil over.

Basically, this type of dish is great for a get-together and ensures that everyone will get a little something of everything that's put into it.  The simplicity or difficulty is entirely up to the recipe that you follow.  Try it and enjoy! 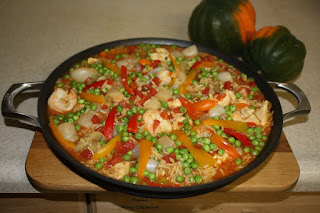 On medium-high heat, saute' together oil, onion, mushrooms and chicken until chicken begins to brown; mix in rice.  Add stock, garlic, paprika, black pepper, red pepper flakes and saffron; mix together.  Bring mixture to a boil, reduce heat to medium and simmer for 15 minutes; adjust heat if necessary to keep at a simmer, not a boil; stir occasionally.

Mix and immerse the shrimp and scallops into the rice mixture; sprinkle peas and bell peppers evenly over top and press down slightly into rice mixture.  Cook for 10 minutes; add the tomatoes, mix and cook another 5 minutes.  Turn off heat and let pan rest for 10 minutes before serving.

Posted by Mary Cokenour at 9:31 AM 0 comments