The Delicatessen - Palaces of Eatery.

Beginning in the 1840’s, Germans began immigrating to the United States; they brought with them many of their preserved, pickled and canned foods, and their family recipes. Delicatessen (also known as “deli”) is a combination of words which roughly translates into “delicacies to eat” or “to eat delicious things”. Within these palaces of eatery, authentic German and/or Americanized versions of foods were offered.  Varieties of sausages (or “wieners”), beef frankfurters, sauerkraut, hamburgers, meat loaf, liverwurst, cold cuts, noodle dishes, dill pickles, herring in cream sauce, lager beer, seltzer water, pretzels (hard and crunchy or the big, doughy New York-style soft pretzels), potato salad, muenster cheese, rolls, pastries, rye and pumpernickel breads.

Growing up, and living in, New York for a good part of my life, I was fortunate enough to experience the neighborhood deli. I miss delis and their uniqueness; the familiarity of the workers behind the counter, the smells of meats and cheeses, the yeastiness of the breads and rolls; it was a complete feast for all the senses.  Now I have not even mentioned the Italian deli, and that would be an article unto itself, since it would be a lead into bakeries and pizzerias.

Big chain supermarkets have begun to understand this concept of food tastes and smells bringing communities together.  They are expanding their services to provide more ethnic based specialties; make-your-own-salad bars; hot soups to go; and the deli sections are, once again, making sandwiches to order.  Even the bakeries are offering more choices than bagged, sliced breads; artisan styles of sour dough, ciabatta, and French and Italian loaves, or more rustic styles with crusty outside, but chewy inside textures.  Basically, the more diverse the populace, the more choices there are for bringing back memories, trying for the first time, or mixing and matching for an adventurous dining experience.

I make a mean deli sandwich of my own and here is one of my husband’s favorites.  Warning!  Like a boa constrictor, make sure you can unhinge your jaw, as you will need to, this sandwich is a mega-mouthful. 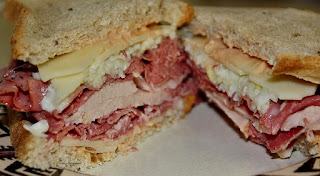 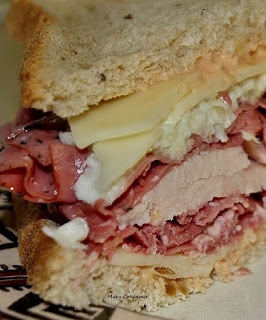 ½ cup each potato and macaroni salads