Coleslaw, a salad, primarily using shredded cabbage, served cold and a frequent side dish at picnics and barbeques.  Researching its origin began with dissecting the name and finding out what it actually meant.  At first, I began with Cole’s Law, and wondered who the heck was this Cole guy, and what Law did he generate about a cabbage salad?  Now, now, do not be rolling those eyes at me; just doing a little tongue-in-cheek joking around with this.

Cole is Greek, meaning "victorious people" while in England, and taken from the Old English word “cola”, means "swarthy, black coal."  No filibustering, about salad, in any courts or political arenas.  Time to trace the true origins of coleslaw, and the Greeks must have been referring to the Romans, for this was a very victorious culture.

The Roman period in the Netherlands began in the year 19 BC, when two or three legions established a camp in Nijmegen. The southern region remained under Roman rule for approximately 450 years, all the while influencing culture, cuisine and lifestyle.  In Rome, a common dish, served at meals, consisted of cabbage, vinegar, eggs and spices.  Since the Romans were guarding the Rhine, and cabbage happens to like growing along river banks, it made sense to introduce it to the populace living there.

Between the 1600s and 1800s, many Dutch immigrated to the New World (America) to escape religious persecution; settlements mainly in New York and Pennsylvania.  The word “coleslaw” is an English translation of the Dutch “koolsla”, with “kool” referring to “cole”, and “sla” meaning “salad”.  Which now brings us back to the name origin of “cole”, but in Dutch, it refers to cole crops such as broccoli, cabbage, cauliflower, Brussels sprouts, Chinese cabbage, and kohlrabi.  Cole crops are cool season vegetables that grow best at temperatures between 60F and 68F.  World languages can be so fascinating, with one word having so many different meanings, dependent on where, and the cultural lifestyle.

An original coleslaw recipe can be traced back to 1770, in the cookbook, The Sensible Cook: Dutch Foodways in the Old and New World (Translated and edited by Peter G. Rose). The recipe is credited to his Dutch landlady who mixed thin strips of cabbage with melted butter, vinegar and oil; frying the cabbage and still creating a creamy concoction.  Sort of reminds me of the Irish dish, Colcannon, made with mashed potatoes, fried cabbage strips and crispy bacon.

Today, coleslaw has grown as a simple salad. Dressings can be a vinaigrette, or sour cream or mayonnaise based.  Other shredded vegetables are added, not just a mixture of white with purple cabbage, but with carrots, bell peppers or hot peppers.  While is it often looked at as a mere side dish, it makes a creamy, crunchy topping for sandwiches such as fried fish or shredded pork barbecue. 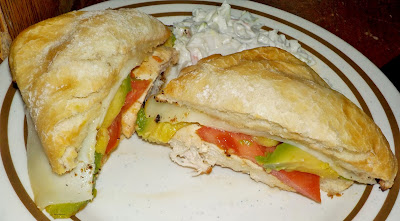 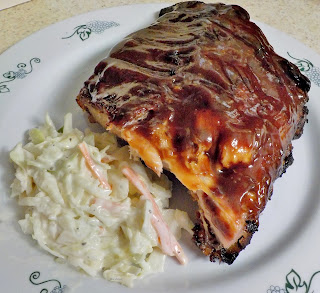 Now the weekend will be here before you know it, so here is my homemade recipe for coleslaw, for your dining pleasure.

Whisk all ingredients together in bowl until smooth and creamy. 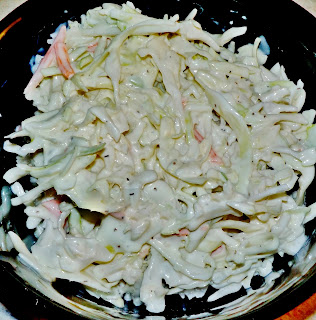 In a large bowl containing 1 lb. shredded white cabbage (or ½ lb. white plus ½ lb. purple) plus ½ cup shredded carrot, pour dressing over; toss until all vegetables are coated.

Oh, before I forget, all the while I was writing it out as cole slaw, Merriam-Webster dictionary has schooled me, the proper spelling is coleslaw; all one word.  The more you know…