I Admit to it…I’m a Pizza Snob. 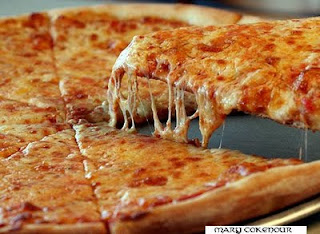 Being born and raised in New York, eating pizza is a staple of the true New Yorker. There are two basic types in any pizzeria: Neapolitan is round in shape with a reasonably thin crust (not wafer thin, around 1/4"), with sauce, aged mozzarella cheese, garlic powder, and various toppings. Usually made in a gas oven, the dough is stretched (occasionally tossed, but that's mostly for the tourists), covered with a sauce primarily made of canned tomatoes and Italian herbs or a cooked sauce, and liberally covered with cheese. The slices are large and usually folded when eaten.


The second most common style of pizza in New York City (that’s the 5 boroughs; and Long Island) is the Sicilian, or “square” pie. Characterized by its thick crust, Sicilian pizza is baked in an oiled pan, giving the crust a completely different taste from that of its round counterpart. The crust of a Sicilian pie is much more bready than the Neopolitan, and usually has a tomato sauce that was more thoroughly cooked before the baking of the pie
Chicago pizza is a deep dish pie made in a reverse fashion than the New York style.  Not bad really, but that’s for another day.
Here comes the complaint…there is not any place in the Four Corners area that makes a great New York pizza.  Some come close to a decent pie, but on a rating scale of 1-10, the highest has been an 8. Cassano’s Italian Restaurant in Moab, Utah and Domino’s in Cortez, Colorado (http://pizza.dominos.com/colorado/cortez/) have come the closest so far.  Domino’s has a pie called the “Brooklyn” pizza, and if they bake it for 25 minutes, instead of the usual 20, than it’s pretty close to perfect.
Other than that, most places undercook the dough, so the crust is pale and doughy, or the dough is so thick, that it is gooey in the center.  Instead of using good mozzarella, it’s usually a mixture of mozzarella, cheddar and jack cheeses.  Why?  What is so hard with sticking to the original, and most perfect, recipe?  Also, why so cheap with the sauce…a smear just doesn’t justify calling it a pizza.
Ok, so here’s my rant about pizza, and yes, I’m a pizza snob and I don't intend to ever apologize for it.
Pizza Dough
Basic Dough
Ingredients:
1 cup of warm water
3 1/2 cups of all-purpose flour
2 tablespoons of olive oil
2 teaspoons of sugar (to feed the yeast)
1 teaspoon of salt
1 teaspoon of yeast
Preparation:
Put warm water (80 to 110°F) into a bowl. Add salt and sugar and mix with a spoon. Add yeast, mix and let it sit for about 10 minutes.  If the water is too warm, it will kill the yeast; too cold, and it will not awaken.
Start mixing, with a fork, by gradually adding flour and olive oil.  Once it is too thick to mix by fork, remove to a floured, wooden board; start kneading by hand.  Knead the dough until you have a smooth ball. If the dough cracks it is too dry. Add water bit by bit until if forms a smooth ball. If your dough feels more like batter, it is too wet and you need to add flour bit by bit. If you need to add water or flour, do it by small amounts; it is easier to fix too little than too much.
Coat the dough with olive oil, place it in a large bowl and cover it with a clean, cotton towel. Let the dough rise for about an hour at room temperature, then punch it down, so it deflates. Let it sit for about another hour. If you want to use it the next day, put it in a refrigerator wrapped in plastic wrap.
Put the dough on a lightly floured surface; a pizza peel (wooden board with a handle) is easier for transferring the pizza from surface to surface. Put a bit of flour on your hands; using the balls of your finger tips and hands, make it into the shape of a circle by stretching it out from the center outwards. If you’re having a problem stretching the dough by hand, se a rolling pin until the dough is about 1/4" thick.
The average size of the pizza will be about 16” which can be transferred to a pizza pan or stone. You get better results when you use a pizza baking stone. The pizza stone should be preheated to 450F for an hour prior to baking, and should be placed in the middle of the oven.
Spread out evenly about 1-1 ½ cups sauce; then add favorite toppings such as cheeses, meats and/or cut up vegetables.
The oven should be preheated to 450F.  Bake for 20-25 minutes; the crust should be browned, but not dark.  Remove from oven, use a pizza cutter for easy slicing up and serve.  Makes 8-10 slices, depending on how its cut up.
Mary Cokenour
January 21, 2011