When I saw that Bountiful Baskets was offering the purchase of 20 pound boxes of fresh tomatoes; I jumped on that. My own garden yielded very few tomatoes itself, so if I wanted to have processed tomatoes ready to make homemade pasta sauce or tomato soup, I needed to buy them. Using canned tomatoes is perfectly fine, but fresh tomatoes, well the taste? Canned cannot compare to fresh tomatoes; there is the lack of preservatives for one, and then the overall knowledge that you know exactly what went into your sauce without having to read any labels. Jarred sauce? Oh, you just don't want to get me started on that; basically that is, in football terms, a "hail mary pass" due to desperation or downright laziness.  Making homemade sauce is NOT that hard.

Anyway, this post is geared towards explaining how to process fresh tomatoes for your own present or future usage.  The first method is "fire roasting" where the tomatoes are placed in the oven, or on a grill, and roasted until the skin blackens and blisters.  After peeling the tomatoes, the flesh itself takes on a richer, deeper flavor making it perfect for meat sauces, salsas and other dishes that look for an outstanding tomato flavor.   For the oven, core the tomatoes and place them open side down on an aluminum foil lined tray (jelly roll pan is best).  Preheat the oven to 450 F, place the tray on the center rack and the tomatoes are ready when the skin is blackened and blistered.  This method takes longer than the grill where you would place the whole (uncored) tomatoes on a very hot grill; watching and turning them as they blacken and blister.  Why not remove the core first?  As the tomato is blackening, it is, in essence, also cooking and you don't want the insides to come dripping out into your grill. 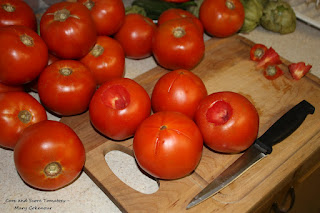 The second method is the water bath where the tomatoes are simmered in a large pot of heated water until the skin wrinkles, and then is easily removed; it basically slides off the tomato flesh. After coring the tomatoes, turn them upside down and score an "X" on the bottom. 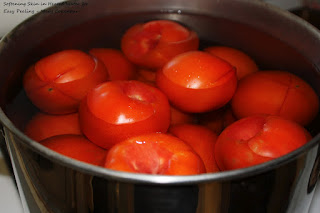 I own a set of very large stock pots, so I was able to fit 30 tomatoes each into two of the pots, and there was no overcrowding; so yes, when I say large, I mean it. First I filled each halfway up with cold water; placed 30 tomatoes into each and then brought the water up to until there was about two inches of free space from the rim. I turned on the stove top to high heat; after about 10 minutes I took my wire skimmer and moved the bottom tomatoes up, the top ones downward, so they would all cook evenly. It took another ten minutes until the skin was wrinkled enough to come off easily; the water was not boiling, but there were small bubbles all around the sides of the pots. Removing the tomatoes with the skimmer, I immersed them in a large bowl of cold water to stop the cooking process. 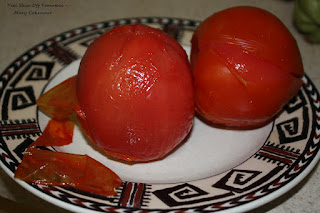 The skin will easily peel off with your fingers; just pinch a corner from the scored section and pull; but if you feel more comfortable using a small knife, then go ahead. The tomatoes will feel cool to the touch from being immersed in the cold water, but don't be fooled; squeeze too hard and your fingertips will get burned from the hot insides. 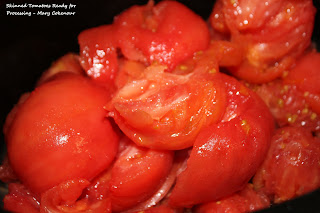 The first 30 tomatoes fit perfectly inside my six quart crockpot; setting it on low I let the tomatoes cook down for three hours. I then added a can (12 ounces) of tomato paste, one very large red onion (diced), 4 tablespoons of Italian herbal mix, 3 tablespoons of minced garlic; the sauce continued to cook for another five hours. 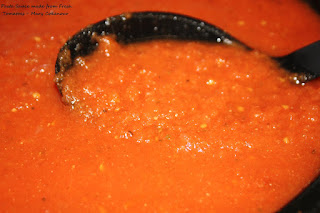 Turning off the heat and letting the sauce get to room temperature, I used my immersion blender to smooth it out. The taste? Absolutely incredible!!! The freshness of the tomatoes and onions is overwhelming; nothing you'll ever get out of a jar.


The second batch of tomatoes I rough chopped and divided up into 4 cup containers which I placed in my upright freezer for future use. Unfortunately, my home is too small (no basement) to devote an area for food canning and storage. Oh how I miss the basement from my old home back in Pennsylvania, but if anyone is interested in buying my current home, so I can move into another larger one, I won't turn down any reasonable offers.

So, buy up those fresh tomatoes when you can and easily home process them for your own use; you won't regret it and your taste buds will love you for it.

Posted by Mary Cokenour at 9:57 AM 0 comments