Brats vs. Sausage, neither is the Weakest Link.

Disclaimer: No naughty children (brats) were grilled and eaten in the writing of this article.

Brats, or Bratwurst, are a grilling favorite, along with a variety of sausages containing some type of meat, usually pork or beef.  Those who do not eat animals wearing hooves, but still like a meaty texture, have chicken and turkey products.  Of course, vegetarians and vegans have plant-based products to choose from.  Whichever you fancy, there is something about grilling, whether gas, wood or charcoal, that intensifies the flavor, and enjoyment of whatever is cooked over it.

Bratwurst comes from the Old High German word “Brat,” meaning “without waste”, and “wurst,” which means “sausage.”  One recipe was traced back 600 years ago, with a list of ingredients containing scraps of the animal (usually pork or veal), seasonings (ginger, nutmeg, coriander, or caraway), and all encased within the animal’s intestine.  Nothing was wasted, as the local market did not exist, and in winter, you ate what you harvested, and had on hand due to preserving.  Nowadays, synthetic casings are used, and the quality standard of the meat is more regulated by the FDA.  Additions to the meat filling can be onions, jalapenos, cheese and even beer.  We favor beer brats as it gives a heady flavor and aids the meat in retaining its juices during cooking.

While bratwurst is a type of sausage, chronologically it is quite a young food invention.  The origin of sausages dates back to 3100 BCE, Mesopotamia (home of modern-day Iraq, Kuwait and a portion of Saudi Arabia), and the founders of man’s cultural history, the Sumerians.  Preserving blood, organs, and small scraps of meat, encased in the stomachs and intestines of the slaughtered animal; sausages were easy to carry, and eaten by hand.

Greece, in 8th BCE, might have seen their warriors, of the Trojan War, feeding on this food, since it is mentioned in Homer’s, The Odyssey. During the 9th BCE, sausages were often served as a treat while plays were performed.  Sausages made their way to Rome during the first century ADE, and was a featured meal during celebrations to the Gods and Goddesses.  However, in 320 ADE, Emperor Constantine I, and the Catholic Church, banned sausage eating due to the association to pagan festivals

It was not until the 1600s when King Charles 1, of England, declared sausages to be “legal” once again.  During WW2, they earned the nickname of “bangers” as they tended to explode with a “bang!” when fried.  Mmm, bangers and mash is a fine, fine meal indeed! Oh, what is “mash”, well mashed potatoes of course.

Like brats, sausages can be made from any meat or poultry, or not; added in vegetables, fruits such as apples and raisins, herbs, spices, and even different chiles dependent on the heat desired.  They can be in links or loose form; the links can be fresh, dried or smoked.

Now whether it is brats or sausages, we find that grilling brings out the best of their flavors.

Slowly turning over a medium-low flame, a delicate char forms.  When are they done? Use a fork or skewer to poke a small hole into the center; if the liquid runs clear, it is ready to eat. 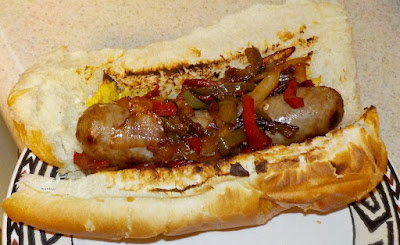 A favorite side is peppers and onions; julienned red and green bell peppers, and white or yellow onions.  In a skillet, on low heat, smear enough olive oil to cover the bottom of the pan.  Add in the vegetables plus a couple of dashes of salt, ground black pepper and minced garlic.  Mix up occasionally to make sure the vegetables do not stick to the bottom of the pan and do not burn.  The vegetables should be softened, but still have a slight firmness around the edges.

Note: there might be times you cannot grill outside.  You can achieve similar results with the brats or sausages by cooking them inside a heavy-duty skillet, or, better yet, a cast iron skillet.  The vegetables can be cooked with the meat, but keep an eye on them to make sure they do not stick or burn.


We enjoy a nicely toasted bun, a brat, or sausage, is bedded down inside and a blanket of sauteed peppers and onions covers from head to toe.  That first bite finds the char of the meat mixing with the sweetness of the vegetables; the bread adding a smooth texture overall.

So, brat vs. sausage, there is really no contest, and the person eating either wins the grand prize!