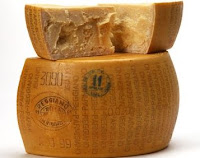 You go out to an Italian restaurant and order "Chicken Parmigiana" (a strictly Italian-American invented recipe by the way); lightly fried breasts of chicken smothered in a rich tomato sauce and covered in melted, gooey cheeses. Then you open up a cooking magazine, or see a recipe online called "Chicken Parmesan" and think, "Oh, that's what I had at the restaurant, and now I can make it at home". No, no, it is not the same thing; might look similar, but there are big differences. In Italy, the D.O.C. (Denominazione di Origine Controllata) is a set of Italian laws enacted in 1955 to protect the names, origins, production methods and characteristics of Italian food and wine; they set the standards. Parmigiano-Reggiano has been produced in Italy over 700 years; it is a complexity of flavors, made from cow's milk, with a hard rind, and aged, crumbly interior. Each wheel of authentic Parmigiano is stamped with a seal which indicates its name, date of creation and a code which specifies where it was made. (see left side photo)  Once the wheel is opened the cheese can be grated, shredded or cut into paper thin slices; the price is high, but well worth the taste, texture and quality.

Then comes Parmigiano's evil twin, Parmesan; you know that cheese, it sits on a shelf in the pasta aisle in a green can, or perhaps a jar; grated and so very, very cheap in price. As you can see in the right side photo, the wheel has no markings on it indicating name, date or origin.  Typically Parmesan is not produced in Italy, is granular in texture and of very poor quality. When you see that recipe for "Chicken Parmesan" which says to coat your chicken in grated Parmesan; now you know what kind of cheese you're actually using, an imitation.   Don't get me wrong, it has its uses, but not as a substitute for Parmigiano-Reggiano.

Now we get to, "So Parmigiana stands for Parmigiano?"  Sort of; Parmigiana stands for "cooked in the way of Parma" which is one of the major producers of Parmigiano-Reggiano.  However, Parma is in Northern Italy, whereas this type of meal comes primarily from the South; so it comes back to, "It's all about the cheese!"  Meat or poultry is pounded thin, dipped in egg wash, coated in bread crumbs and lightly fried.  It is then smothered in tomato sauce and covered with, what else, Parmigiano cheese and baked until the cheese is melted and browned around the edges.  Depending on the area in Italy, different versions of Parmigiana use mozzarella cheese, provolone cheese or a mixture of the three.  Those "Parmesan" recipes you see in magazines or online usually tell you to coat the meat or poultry in mayonnaise, coat liberally with the cheese and bake to get a crispy texture; sauce is usually an option or side.

This is all leading to today's recipe for Eggplant Parmigiana, but I'm going to put a real twist on the usual recipe.  Typically I would do the layering of fried eggplant with sauce and cheese; instead though, I'm using a very chunky vegetarian sauce.  Think of it as a vegetable lasagna using the eggplant in place of pasta noodles.

I mixed the grated Parmigiano-Reggiano into my ground bread crumbs, while I used Sargento's new Chef Blend 6 Cheese Italian mixture in the layering and baking processes.

In the making of my Vegetarian Pasta Sauce, I cut up portabella mushrooms, green and red bell peppers, onions and zucchini into one inch chunks; no eggplant was added this time as it was being used elsewhere.   I also added a cup of grated carrot to add sweetness to the sauce.  Once the sauce was done, I left it chunky instead of smoothing it out with my immersion blender.

The size of the eggplant is dependent on how much you intend to make, and what size baking dish. I used an aluminum loaf pan which you might typically use to make a quick bread or pound cake. After removing the top and bottom, I peeled the tough outer layer off and then cut the eggplant into 14 - 1/4 inch round slices. I could have made long slices instead, but felt the smaller round slices would come out more easily from the pan, and be more appealing to the eye.

First I lightly coated each slice with flour; I did this to create a barrier for the frying oil. I then dipped them in an eggwash and coated them with the bread crumb/Parmigiano mixture. Eggplant is basically a spongy vegetable and will easily sop up and retain oil that it is fried in. You want to use an oil that has a high fry temperature, such as peanut or canola oils; the eggplant can then be "flash fried", so the outside is nicely browned and crispy, but the eggplant itself has not been soaked in the oil.

Drain the fried eggplant well on paper towels to make sure any extra oil is drawn out; you want to retain that crispy outer coating without a greasy texture within. When they're all done, time to start the layering process. Preheat the oven to 400F.

Spread 1/4 cup of simply the tomato sauce on the bottom of the pan. Place 3-4 slices of the fried eggplant and sprinkle 1/4 cup of cheese over them.  Spread more sauce, but make sure to put a good helping of the chunky vegetables; repeat this layering twice more.

But on the final layer, spread 1/2 cup of the cheese overall. 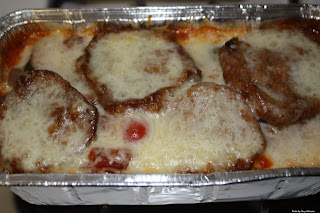 Cover the pan with aluminum foil; make sure there is space between the foil and cheese, so the cheese doesn't stick to it as it bakes. Bake for 30 minutes; remove the foil and bake an additional 5 minutes to allow the cheese to brown around the edges. 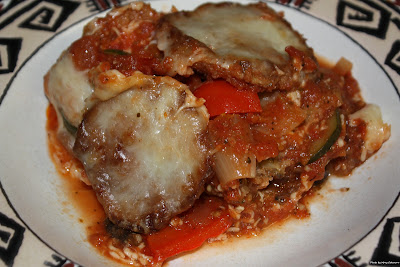 Allow the eggplant to rest for 5 minutes; the sauce may have stopped bubbling once you removed the pan from the oven, but it's still bubbling internally. You want it all to settle before serving. So there you have it, Eggplant Parmigiana, but done up in a type of "lasagna" style with chunky vegetables in the sauce. The loaf pan I used makes a hefty two portions, or three portions for those petite eaters....it won't make it to three once you see, smell and taste this dish. Enjoy this Italian adventure!