Have you seen the Arby's commercials with New York private investigator, Bo Dietl; where he exposes Subway's cold cut sandwich products as being "unfresh"?  He states that their products are sliced and prepackaged at a processing plant in Iowa.  Now no matter if cold cuts are cut directly in front of you, like at a supermarket deli counter, or presliced and packaged elsewhere; lets be honest, cold cuts are cold cuts.  Unless you roast your own and then slice it up of course.

My beef, pardon the pun, with Subway is the making of the sandwich itself; the prenumbering of cold cut slices each sandwich receives.  As an experiment, I drove around to different Subway locations in my area, ordered the same sandwich with the same ingredients, and received, pretty much, a clone after clone after clone.  The sandwich?  The 12 inch Black Forest Ham and Turkey for $7 (sub only) on a wheat roll (plain roll if wheat was unavailable) with lettuce, banana pepper rings, oil and vinegar.  Each Subway gave me exactly 4 slices of ham, 4 slices of turkey with a whopping handful of shredded lettuce and pepper rings, but just a drizzle each of the oil and vinegar.  By the way, I asked about the 6 inch sub; you get exactly half of what is in the 12 inch for $4 (sub only). Their 6 inch sub is also one of their 12 inchers cut in half; what do they do with that other half anyway? Is it kept and served to another customer? Is it discarded in the trash bin? Is it thrown outside for birds and animals to nibble on? Basically, is food used or wasted? 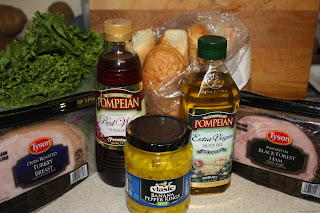 I continued my culinary investigative work by going to the supermarket, buying the ingredients I needed and make my own version of this Subway sandwich.  A package of rolls (7 inch in length), packages of Black Forest Ham and Oven Roasted Turkey (extra lean and gluten free), Banana Pepper Rings, Olive Oil and Red Wine Vinegar cost me, in total: $15.42 with tax; Subway charges tax on their sandwiches too. 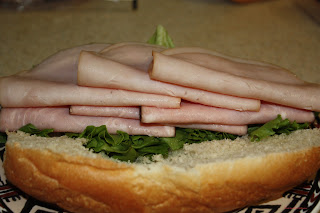 The slices of cold cuts were larger than the ones served at Subway by two inches, and I was able to put 3 slices of each on each sandwich...one more slice of each than Subway's 6 inch.  Subway layers their cold cuts flat while I folded mine; more appealing to the eye I believe.  I layered on a nice bed of lettuce for the cold cuts to sit upon, but not so much that it overwhelmed.

A nice serving of banana pepper rings for a sweet crunch; sometimes when I'm in the mood for it, I mix in slivers of red onion between those pepper rings. Not today though.   I'm generous with the oil and vinegar; what doesn't stay on the bread seeps onto the plate.  Then I can dip any dry pieces of the roll into the excess oil/vinegar mixture as I eat my sandwich; it's a decadent pleasure. 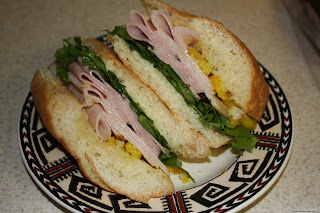 ...and there is my version of Subway's Black Forest Ham and Turkey sub. Price wise, I can make six-7 inch subs for the price of 2-12 inch Subway subs, or 3-6 inch Subway subs. Taste, Texture and Appearance wise, my homemade version is outstanding!!!  As you can see in the photo, I didn't squash my sandwich together either, but Subway does.  Why do they squash the sandwiches when they wrap them?  That's so annoying!

Subway is fast food; Homemade is fresh food; yes, there is a big difference.