Pot Roast is actually an example of braising; the searing of meat and finishing it off in liquid, cooked low and slow. Italian Osso Buco and the traditionally American Yankee Pot Roast are prime examples, so if you have prepared and/or eaten either of these dishes, you've eaten braised meat.  We're going to do a little more traveling to Italy with this post and mainly due to the newest commercial for the restaurant "Carraba's Italian Grill" featuring "Beef Brasato".  The origin of this dish is Barolo, located in Northern Italy where a deep, rich red wine is made and used in the making of "Brasato al Barolo" or beef braised in Barolo (wine).  A side note, if you cannot find Barolo wine, a full bodied red wine such as Merlot will do nicely as a substitute.

What is truly unique about this braising process is instead of using water or broth, the liquid is wine. The alcohol completely cooks out, so no need to worry if ingesting alcohol is not in your diet for whatever reason. 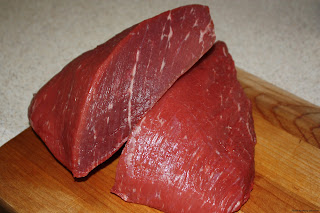 When choosing a roast for braising, I usually go with rump, eye round or sirloin tip for the leanness, and any outside excess fat is removed while a little marbling is perfectly fine.  Normally though, for pot roasting, a cheaper, tougher cut, such as chuck roast, is the norm.  However this cut is also loaded with sections of fat running throughout it; this fat tenderizes the meat, but causes your gravy to become very greasy.  If this is the only roast you can find at an affordable price, don't panic as there is a way to fix that gravy.  One hour before you'll be getting ready to serve the meal, ladle out however much gravy you think you will need plus one cup into a plastic container.  Put the container into the freezer; in an hour the fat will have risen to the surface and solidified.  The fat is still soft enough to spoon out and will leave you with a gravy that contains little to no grease in it.  While heating up the gravy, your meat should be resting before slicing and they'll both be ready at the same time for serving.  See, told you not to panic.


A traditional base for soups and stews is the "mirefois", the combination of onions, celery and carrots.  If cooking were a religion, this would be known as "The Holy Trinity".  Here's a little tip:  Carrots give a natural sweetness to a dish, especially if it contains tomatoes which can be bitter or acidic, so don't hesitate to add them when cooking pasta sauce or chili.  The mirefois will be softened up before adding to the recipe to ensure the vegetables do not remain "hard" after the entire cooking process is done.
Time to cook! 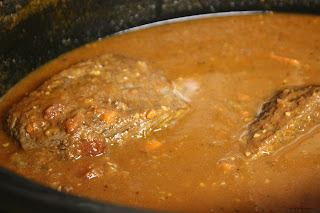 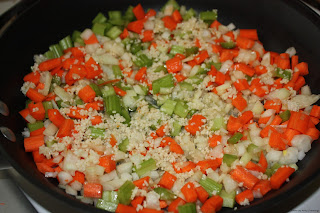 In a large skillet, medium heat, put 2 tablespoons of oil and mix together the onions, celery, carrots and garlic.  Let the vegetables cook for 10 minutes to soften, stirring occasionally to make sure they are not sticking, browning or burning.  Remove to a bowl when done and wipe out skillet. 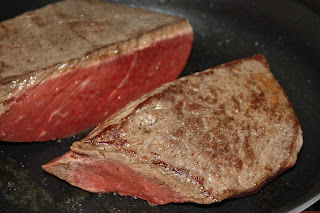 Return the skillet to the burner, but turn the heat up to medium-high and add the remaining 2 tablespoons of oil. Season the roast halves with the salt and black pepper; place into the skillet and sear both sides of the meat and all edges. While the meat is searing, turn on a 6 quart crockpot (slow cooker) to low and spray the inside with nonstick cooking spray. Once the meat is seared, place it inside the crockpot.

Now start a layering process: on top of the meat spread out the softened vegetables, mix the tomatoes with the tomato paste and spread this over the vegetables; sprinkle on the seasoning mix before pouring the wine over it all. Place on the lid and let it cook for 10 hours. Remove the meat to a serving platter to rest; use a hand blender, or transfer the liquid to a stand blender. Pulse quickly 4 to 6 times and the gravy will thicken up, but you want to leave some of the vegetables intact for taste, texture and eye attraction. 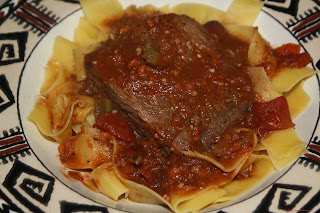 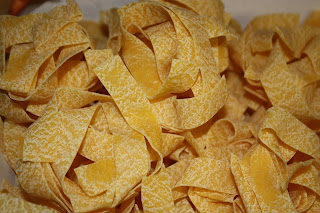 Side suggestions: I used pappardelle, a long ribbon like egg pasta made with semolina flour, but if you cannot find this, using extra wide egg noodles is perfectly fine. Garlic mashed potatoes would enhance the flavors of the gravy; or serve it over Polenta. Polenta is very Italian indeed and can be served in a soft texture, like mashed potatoes, or in a firmer texture which has been fried up to a golden brown in olive oil, butter or combination of both. 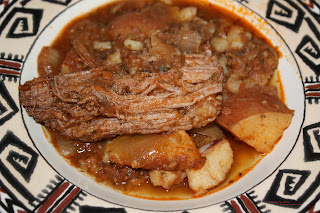 Who needs to go out to Carraba's when you can make the same dish in the comfort of your own home?  Enjoy!