Soup, Stew or Goulash; Paprikash is a Hungarian Best.

Traditionally, the Hungarian dish of Paprikash is made with chicken; the two other main ingredients are paprika and sour cream. When I first made this dish, I used turkey tenderloins I had found on sale. It came out so delicious, I didn't even try using chicken afterwards. Depending on the paprika used, the recipe can turn out to be mild and reddish in color; or spicy and brown in color. I use the mild paprika and once you add it into your skillet, you'll be amazed at how it makes your entire dish pop with color. I also add a little cayenne pepper, just enough to let you know it's there at the back of your throat, but not enough to overwhelm the entire dish.

The quantity of liquid added plus noodles or spaetzle, will help determine the final thickness of the dish. Personally, I like adding extra wide egg noodles directly into the pan; allowing the noodles to be infused with the flavors of paprika, cayenne pepper, vegetables and sour cream. If you're like me and prefer egg noodles, let me recommend a brand to you. "Amish Kitchens" of Millersburg, Ohio ( http://www.marzetti.com ) make their noodles primarily of wheat flour and eggs. They are absolutely fantastic and make the brands of egg noodles seen in supermarkets taste like garbage.

Don't be worried that there will be too much liquid at first, the noodles will eventually sop it up as they rest in the sauce. 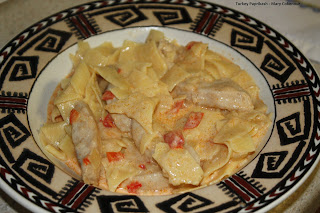 In a plastic bag, coat the turkey with the flour. Heat half the oil in a large skillet, medium-high heat; brown turkey and set aside. In the same skillet, heat the other half of the oil; sauté’ the onions and peppers until they just start to soften. 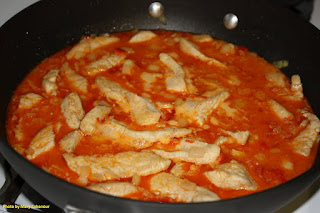 Return the turkey to the skillet and add the paprika, cayenne pepper, chicken stock and half n’ half; bring to a soft boil; stir, reduce heat to low and let simmer for 5 minutes. Mix in the sour cream thoroughly; add noodles and toss to coat; let cook for 2 minutes.