If We Believe Henny Penny.

Just Mathias Thiele was a Danish scholar and librarian who published the Brothers Grimm fairy tale, of Henny Penny, in 1823.  Henny Penny (Chicken Little in the USA) was pecking away in the farm yard, as chickens do, when a rogue acorn bounced off her head.  Being not too bright, she immediately stirred up mass panic amongst the other farm animals by proclaiming, “The sky is falling! The sky is falling!”  Well, the other animals told her to run to the king and warn him, that is until she met a sly fox, Foxy Loxy.  To keep all the fowl safe, he suggested they follow him into his nice warm, and dark, den.  Of course, being a fox, his idea of safe meant eaten and digesting in his very full stomach. Depending on the version of this story, Foxy Loxy eats all the poultry; or Cocky Lockey is in time to warn Henny Penny, and only they two get away; or they are both, in time, to rescue all their compatriots of the fox’s true intentions.

Moral of this story?  That depends on what is happening in the world.  At the time of its origination, the lesson to learn was, “have courage, even when it feels like the sky is falling.”

During times of war, “fear-mongering weakens the war effort and costs lives.”  …and when it comes to life, in general, “Don’t believe the hype, and hungry foxes can’t be trusted!”  Thinking back to the end of 2019, and up to current days, do any of these morals apply?  Seems like all three, to me.

Recently the news featured stories about the avian flu which is forcing thousands of domesticated chickens and turkeys to be euthanized.  Wild fowl can carry and transmit the virus to domestic species, but not become ill themselves.  This, in turn, is also creating a shortage of eggs, and egg related products; a domino effect that will cause mass consumer shortages in the long run.  One solution could be to breed and cultivate stronger strains of the wild fowl, but, of course, this will not protect them from stronger strains, of the avian flu, developing over time as well.  As for eggs, there are excellent egg substitute products on the market, but they are pricey, and prices will increase due to the demand for them.  Definitely, this is a time to have courage!

Discussing the world’s affairs with my hubby, I suggested that, perhaps, we are seeing a circling back to a more agrarian society.  An agrarian society, or agricultural society, is any community whose economy is based on producing and maintaining crops, and farmland. Instead of paying farmers to leave their land fallow, or shipping the harvests to foreign countries, we now become more self sufficient within our own country.  As the saying goes, “everything old is new again.”  which leads into my vegetable lasagna recipe.

Typically, when you hear the word "Lasagna", images of long, tender noodles holding layer upon layer of meat sauce and mixture of Italian cheeses might come to mind.  This new recipe I am sharing is about a lasagna without meat, no typical red tomato sauce, and very little cheese.  It has the same long, tender noodles, but instead there are layers chock full of sautéed vegetables, fresh spinach leaves and a béchamel sauce.  Béchamel is a white sauce, but since I did melt in a fair amount of shredded Parmesan cheese, it becomes an Alfredo sauce.

Even though the noodles are undercooked slightly, they will be pliable and not fall apart.  Will they cook evenly while baking?  Yes!  The sauce, plus natural liquid from the vegetables, will finish cooking the noodles; they will be tender and absorb flavors of both the sauce and the vegetables.  The Alfredo sauce allows the vegetables to retain their individual flavors and truly enhances them. 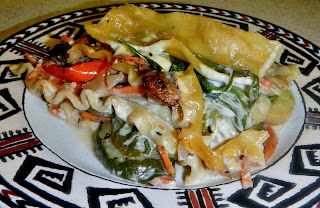 For the Lasagna Filling: 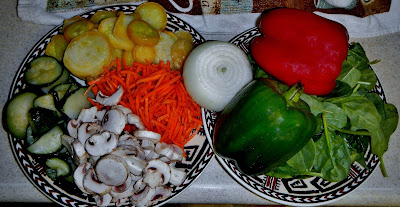 For the Alfredo Sauce:

Prepare noodles according to package direction, but undercook by 5 minutes to leave the noodles pliable.

Prepare the Alfredo sauce which should be kept warm until ready for use.  In a large saucepan, heat the butter over medium heat until melted; gradually add the flour, stirring until smooth.  Cook, stirring constantly, until the mixture turns a golden-brown color, about 6 to 7 minutes; this is the roux.

Add the hot milk to the butter mixture one cup at a time; whisk continuously to avoid burning or clumping. When mixture is completely smooth, add the cheese and whisk until smooth again; remove from heat; season with salt and nutmeg. 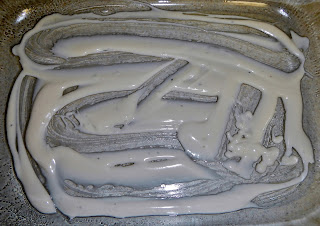 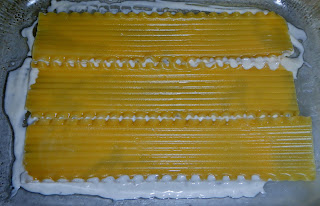 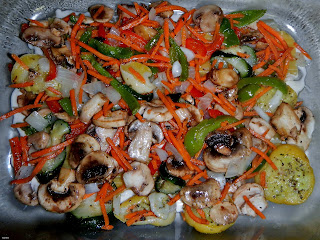 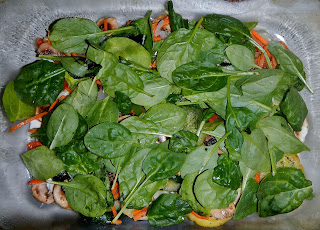 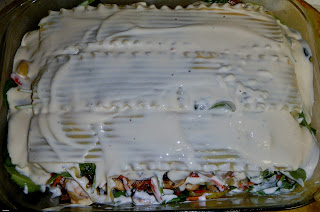 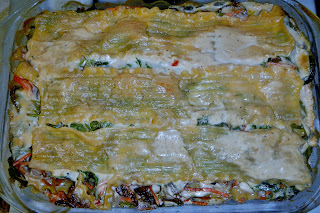 Bake, uncovered, for 40-45 minutes; until golden brown.  Let rest for 20 minutes before cutting into portions.