As long as I can remember, pumpkin and pecan pies were served for dessert after the huge Thanksgiving meal of turkey, stuffing and all the rest of the trimmings. Whether served plain, with whipped cream or ice cream; when finished with these yummy treats, a good nap was seriously needed.

With all the preparations needed for the feast, baking pies was always the farthest from my mind, so I would purchase pies from the local farmers' markets. This year though, I decided that I had the time to spare and made the pies. Of course everyone was given a steadfast warning, "disturb me while I'm baking and you take your life into your own hands". Yeah, I'm that serious when I'm in the kitchen and need to concentrate; baking takes concentration.

Anyway, the pies came out just fine and it was very hard to resist cutting a slice of each, just to try of course. So here are my recipes for pumpkin and pecan pies. 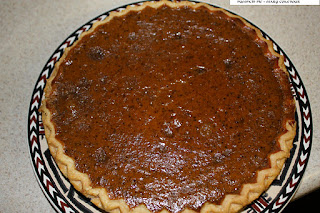 Preparation:
Preheat oven to 425F; place a jelly roll pan in oven to warm up. (this will keep the pan from warping while the pies bake). Divide pecans, if using, between the 2 pie crusts, pressing them down slightly into the bottom of the pie pans. (be careful to not go through the crusts)

In a large bowl, mix together the pumpkin, sugar, salt, spices, vanilla and eggs. One can at a time, beat in the evaporated milk until well incorporated into the pumpkin mixture. Remove jelly roll pan from oven and place pie pans on top; ladle pumpkin filling into each until it reaches the interior edge. Sprinkle 1 ½ Tbsp brown sugar over the tops of each pie. (as the pies bake, the brown sugar will produce a crème brule’ effect)

Bake pies at 425 F for 15 minutes; reduce heat to 350F and bake an additional 50-60 minutes; a knife will come out cleanly from center when done. Let pies cool for 2 hours before serving. 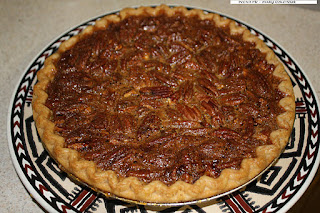 Pecan Pie
(Recipe is from Karo Syrup with 2 changes: 1 Tbsp vanilla extract instead of 1 tsp.; 1 ¾ cups pecan halves instead of 1 ½ cups)

Preparation:
Preheat oven to 350 F; place a jelly roll pan in oven. (warming the pan will keep it from warping as the pie bakes) Place crust into pie pan if it isn’t already done so.

In a large bowl, combine all the ingredients except the pie crust; pour into the pie crust and place onto center of warmed jelly roll pan. Bake for 50-70 minutes; pie will be done when pressing down lightly in the center, it springs back. Let pie cool for 2 hours before serving.