Stouffer's Sautes for Two not Impressive. 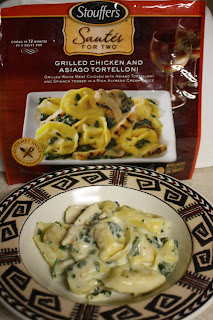 A growing trend in the frozen food aisle is "Meals for Two". I'm not sure if this is geared towards young married couples where cooking is still a mystery, or just couples in general who don't feel like cooking or going out to dine. Since it is just my husband and myself, and we like trying out new products, it was decided to give Stouffer's Sautes for Two a try.

The chosen meal was "Grilled Chicken and Asiago Tortelloni" and as you can see from my photo, what is pictured on the package looks quite different from the made at home meal. The tortelloni on the package has a lovely golden egg yolk color, but my photo shows stark white. In fact, there was so much cream sauce, that it drenched all the ingredients in whiteness. Their photo also shows grill marks on the chicken slices, but none of the pieces in my package had any marks. The few mushrooms were lost in creamy whiteness, but the green of the spinach certainly stood out.

I have a problem with one of the ingredients listed on the package - brown sugar. Why would brown sugar be in Alfredo sauce? I believe the brown sugar was probably used to obtain the grill marks on the chicken and make them stand out more. A good grilled piece of chicken doesn't need brown sugar. Then there was the cooking instructions - first step was to put the Alfredo sauce pouch in a bowl and run cold water over it until it thawed. I am perplexed on why gallons of water should be wasted in thawing a sauce pouch, when leaving it in the refrigerator overnight (which I did) would achieve the same goal, and save water. In my opinion, this instruction is one of the stupidest, and most wasteful, I have ever seen.

As the ingredients cooked, the scent of the butter and cheese within the sauce was enticing; it took 15 minutes to come to a completely heated state. The taste however was disappointing; I found it to be bland and too oversauced. A dash of nutmeg and ground black pepper helped it to be a true Alfredo sauce. The chicken had no grill flavor; no marks either, so why should I expect the flavor? The tortelloni was made and cooked very well though, and while the spinach flavor was lost in the cream sauce also, it was a nice touch.

Overall, I would have to give this product a "C" rating; not totally horrid, but not something I would like to spend good money on.