Something New with Asparagus and Mushrooms. 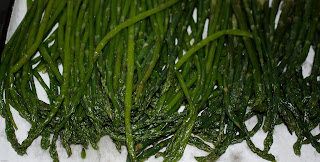 Asparagus is not one of our favorite vegetables; its taste is harsh and overwhelms, even with baby asparagus. If I happen to receive baby asparagus with my Bountiful Basket, I usually make quiche or cream of asparagus soup; the last two bunches though I froze after blanching them in water. I still needed to figure out what to do with them, and the recipe I created was influenced by a mushroom appetizer we recently enjoyed at Bernardone's in Farmington, New Mexico.

Even though I had cut off the "woody" ends that had developed even on baby asparagus, the freezing process caused the ends to stiffen up, so they needed to be trimmed once again.  I had missed a few and it was immediately evident once hubby tried to chew on those tough ends.  Other than that, the asparagus flavor was still overwhelming when the dish was freshly cooked, but mellowed once it sat in the refrigerator for 24 hours and was reheated.  If you're an asparagus lover, you'll like this recipe with added mushrooms and a bread crumb and cheese topping.  Me?  No, I'm still not fond of asparagus, but at least I tried it to see how it tasted. 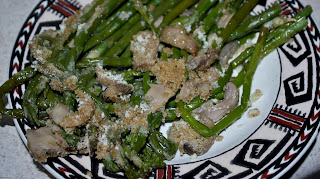 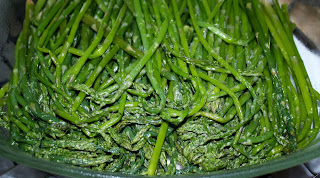 Preheat oven to 350F; spray a 3 quart baking dish with nonstick spray.  Spread the asparagus in the baking dish and drizzle 1/4 cup of olive oil over it. 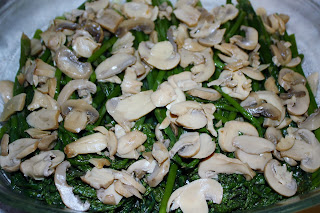 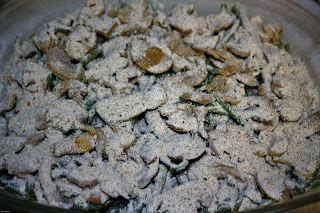 Mix bread crumbs with the herbs and spread evenly over the vegetables. 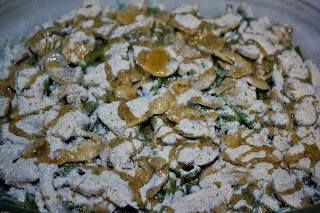 Drizzle remaining olive oil over the bread crumbs; place dish in oven and bake for 45 minutes. 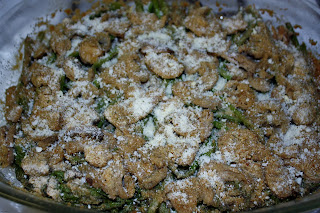 Spread grated cheese over bread crumbs and bake for an additional 15 minutes.


The asparagus and mushrooms will absorb the flavor from the olive oil and be tender.  The bread crumbs will only crisp up slightly.  If you want a crispier topping; sauté the bread crumbs in the olive oil for 3 minutes; top the vegetables and bake for only 30 minutes before adding the grated cheese and baking the additional 15 minutes.