Twin Rocks Gets a Facelift. 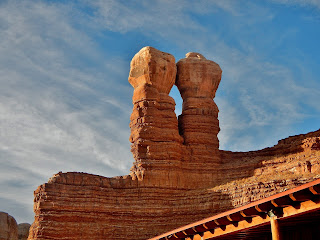 
For a few weeks, Twin Rocks Café, down in Bluff, was closed for reconstructive surgery.  Seems this old established restaurant was looking for a younger, fresher look; so popular in today’s society of Botox and collagen injections.  After hearing they had reopened, we hightailed it down to Bluff to see the new do; but alas, the bandages still covered the façade.  The wintery weather, all of San Juan County was experiencing, was making the healing process go slow. At one time, the interior dining area was “L” shaped, but now it was a three sectioned area; great for closing off a private party area when needed.  Where patio seating used to be, it was now enclosed with large picture windows to allow in more light, and outdoor viewing.  During cold weather, or rainy days, diners would be comfortably warm, and dry, while enjoying Twin Rocks’ fresh made meals.  The patio tables and chairs outside had been moved further down towards the gift shop; good strategy to entice those outside to come in and buy. 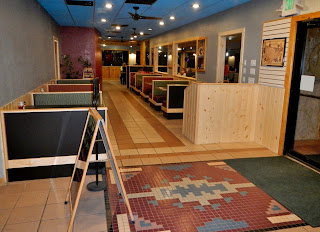 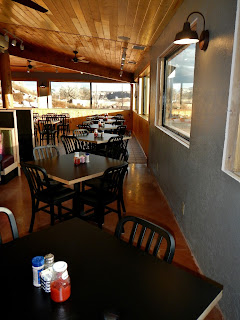 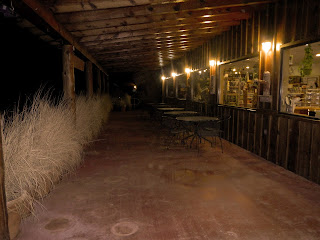 It was a Saturday night and the specialty was Prime Rib (12 or 16 ounce) with potato, grilled vegetables and choice of soup or salad.  Two of us went for this goodie; tender beef perfectly cooked to your desired taste; fluffy baked potato, or homemade, red skin, mashed potatoes; an assortment of grilled vegetables with just a touch of seasoning.  My husband, Roy, ordered the Country Fried Steak which he described as “just right”; breaded coating not too light, but not too thick.  A mildly peppered gravy which enhanced the taste of the steak and mashed potatoes, instead of hiding their flavor.  Our good friends, Amy, and her father, Richard Watkins were with us; he ordered the Fish and Chips which was lightly bread, flaky fish and crispy, fluffy French fries.  Dessert, not tonight, as we had pigged out on Twin Rocks’ deliciously addicting Chicken Wings and Onion Rings for appetizers. 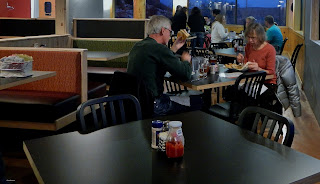 Service at Twin Rocks Café is always welcoming, friendly and with a smile; any concerns are taken cared of immediately.  Dining is leisurely; no one rushed out just to get a high turn around rate.  Happy diners are a must; no matter if the person is a local, or visitor from another area, the management wants everyone to come back!!!  Locals come from all over San Juan County to eat the mouthwatering American and Navajo cuisines offered on the menu.  Thrilled voices hailing greetings to friends and neighbors filled the air; even former mayor of Monticello, Doug Allen, and his family were there.
The finished workmanship on the dining area will be a site to see; but truthfully, everyone goes for the great food.  Twin Rocks Café, now that’s good eats!
﻿ Mary Cokenour 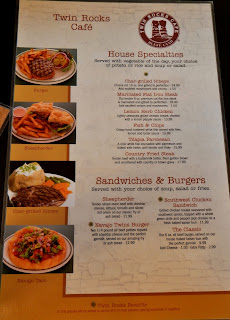 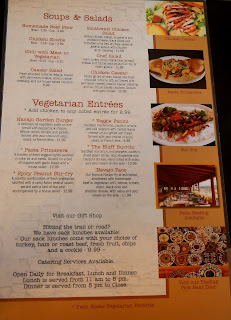 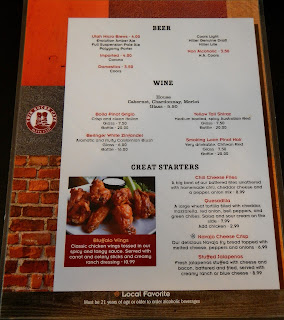 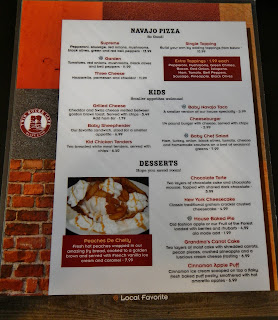 Posted by Four Corners Foodie at 10:40 AM 0 comments

Fruit salads have been making the rounds of recipe books, and personal recipe cards, since about 1910 thanks to the canning industry.  Depending on the author, some of these recipes began to pick up their names by location, such as “Golden Gate Salad” and “Watergate Salad”.  In 1922, Helen Keller published a recipe called “Golden Gate Salad”, consisting of canned diced pineapple, nuts, marshmallows, whipped cream, other fruits and celery.  The reason for the name simply being that the first time she tried such a salad was in California, probably the San Francisco area.  Helen’s recipe also appeared in a 1925 cookbook, “Favorite Recipes of Famous Women” (Florence Stratton, author) with a notation of, “It is best made with fresh fruits, but it can be made of canned fruit.  At home we often serve it instead of dessert, with a little more whipped cream.” 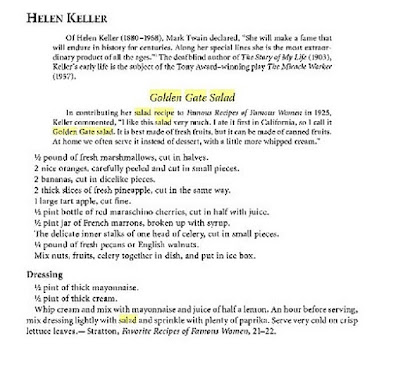 “Watergate Salad”, however, has rather an obscure pedigree; with a humble beginning of Ambrosia and the addition of chopped pistachio nuts; creating Pistachio Salad.  In 1975, Kraft Foods offered consumers a new flavor in the Jell-O pudding line, pistachio; a recipe for Pistachio Pineapple Delight appeared on the box.  This dessert salad picked up names, along its United States journey, such as Pistachio Delight, Shut the Gate Salad, Green Goop, Green Fluff or Green Stuff.  It was not until The Denver Post, in the Empire Magazine of June 27, 1976, published a recipe for Watergate Salad; stating that the recipe was developed by a sous chef at the Watergate Hotel in Washington, D.C.  When scandal hit the White House, and President Richard Nixon, the recipe took off like wildfire.  At the same time, a Watergate Cake was developed with “cover-up icing and full of nuts”; along with other satirically named recipes such as Nixon's Perfectly Clear Consommé and Liddy's Clam-Up Chowder.  Kraft even changed the name on the pistachio pudding box to Watergate Salad to keep up with the presidential scandal. 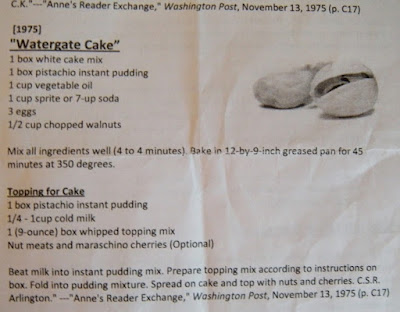 Perusing through my Utah based cookbooks, lime Jell-O made many an appearance in recipes; pudding, not so much.  Even the use of pistachios was kept to the more garden type salads, or as a main ingredient for salad dressing.  Various bloggers, from Utah, mentioned family reunions in which Pistachio Salad was present; the recipes being variations of the original Jell-O pudding recipe.  Does that mean Utahns aren’t cracked up about pistachios?  Au-contraire!  Located in Hurricane, Utah, Red Rock Ranch Pistachio Orchards (http://rpistachios.com/) has been producing a unique variety of pistachios for over ten years.  The dry climate of the desert gives the nuts sweeter flavor and greener coloring; while high in fat, they are low in carbohydrates. 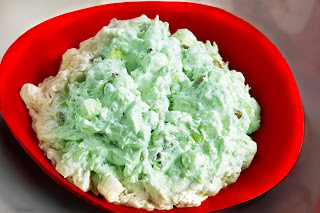 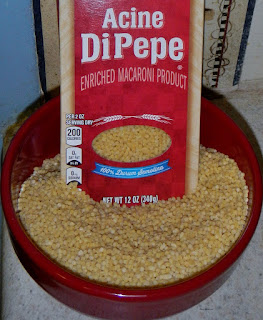 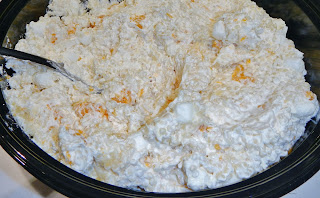