You take your chances when going to Denny's.

Every once in a while we want breakfast out, so we're not novices to Denny's.  The problem with the Denny's in Cortez is when it's busy, the service is slow and the food is low quality; when it's slow, service is better and so is the food.  We were there on Sunday morning and it was busy. 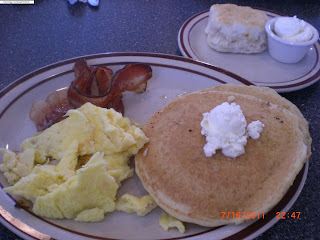 Create your own Grand Slam breakfast: I asked for soft scrambled, they came out hard and cold; the bacon was barely crisp; the pancakes and biscuit though were fluffy and hot. 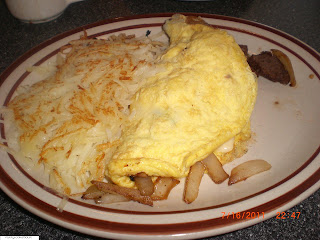 From the new All American menu, hubby chose the Philly Cheesesteak Omelet.  It smelled great, not so with the taste though.  The eggs, again, were hard and cold; the steak was tasteless; actually it had a sort of artificial taste to it; the best part of the omelet was the grilled peppers and onions.  The hash browns were the typical, nothing to write home about, hash browns.

Our waitress though did make sure our coffee cups were filled throughout our time there, so kudos to her for that.

Another short, but not so sweet, restaurant review.