Having ground venison(deer) in the freezer, I wanted to do more than just make burgers, meatloaf or a meat sauce for pasta; but what? I had not made Shepherd's or Cottage Pie in a long while and the thought of mashed potatoes with meat was too tempting.

Normally, a
traditional Shepherd's Pie is made with ground lamb; if it's made with ground beef, that is called Cottage Pie. Now why would I call this dish with venison Shepherd's Pie; simply it's based on taste. Lamb has a strong, gamey flavor even though it is an animal basically raised for its wool and meat. Venison, on the other hand, is a creature hunted in the wild; with a strong, gamey flavor. Yes, it's convoluted thinking, but I know for a fact the solution is a great tasting meal.

One thing I knew for sure, to smooth out the flavor of the venison, I needed to marinade it overnight. I placed one pound of the ground meat in a plastic container and added two tablespoons of red wine vinegar, 1/4 teaspoon each of salt and ground black pepper and mixed it thoroughly. Sealing up the container, I placed it in the refrigerator until I would use it the next day. 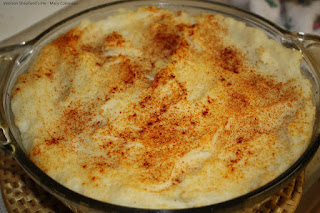 In a large skillet, I began browning the meat over medium-high heat. After a couple of minutes, I added in one tablespoon of Worcester sauce and 1/2 teaspoon of onion powder; mixed thoroughly and let it cook until no more redness in color showed.

Now in a large mixing bowl, there was already waiting 1 and 1/2 cups of a pea and diced carrot mixture, a 1/2 cup of sliced mushrooms and 1/2 cup of beef broth. Of course I already had the mashed potato topping waiting for its grand entrance. Here's how to make that just in case you haven't followed the link to Shepherd's Pie:

Boil the potatoes in salted water until tender. Drain and mash the potatoes, add butter, milk, grated cheese and pepper to the potatoes.

Preheating the oven to 375F, I sprayed a 2 quart casserole dish with nonstick spray. First I spooned in the venison filling, then spread the mashed potatoes over the filling; finishing with the sprinkling of paprika over the topping. 40 minutes later it was ready to eat. 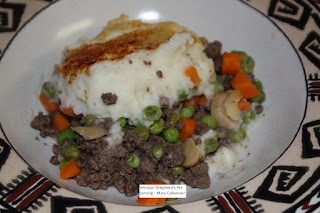 The ground venison had the taste of fine steak with the underlying flavor of red wine; the vegetables were tender, not mushy; the mashed potatoes were smooth with a buttery, cheesy flavor. The scent however was heady with a mixture of meat, potato, cheese and wine; you knew what you were in for and you wanted it.

Don't be afraid to try out wild game such as venison. Begin with a simple recipe, such as one of the many recipes I've posted on this blog concerning venison and elk. You will be surprised how easy and flavorful it is.

Posted by Mary Cokenour at 6:58 AM 0 comments