This Shrimp Recipe is Light and Easy.

So, there I was at the City Market in Cortez, Colorado picking up the ingredients to make an Alfredo sauce. I had already purchased pappardelle elsewhere; now I wanted to combine it with shrimp, broccoli, sugar snap peas and cover it all in Alfredo sauce. That was the plan, until I got home and decided, "I don't want Alfredo sauce, I want something different!"  Now what, was the question indeed.

I still wanted the shrimp, definitely the sugar snap peas, but broccoli and pasta just didn't seem enticing at the moment.  Digging around the fridge, I found a red bell pepper and diced it up; in the pantry I found a jar of chopped shitaki and oyster mushrooms in brine (drained that off).  Hmm, now what, I thought, perhaps a stir fry?  Rice, sigh, rice is a bore; but wait, instead of water, why not cook it in broth and soy sauce...and a new plan was finally born.

The dish I ended up with was so light and yet, packed with flavor; it was hard not to eat the entire skillet full.  It was also very, very easy to put together.  The ingredients in the skillet finished cooking up just as the rice was done; no waiting for one, while the other got cold.  I love when a plan, turns into a plan which ends up delicious!  Oh, the other ingredients I had purchased to make an Alfredo; you know I'll come up with something else eventually. 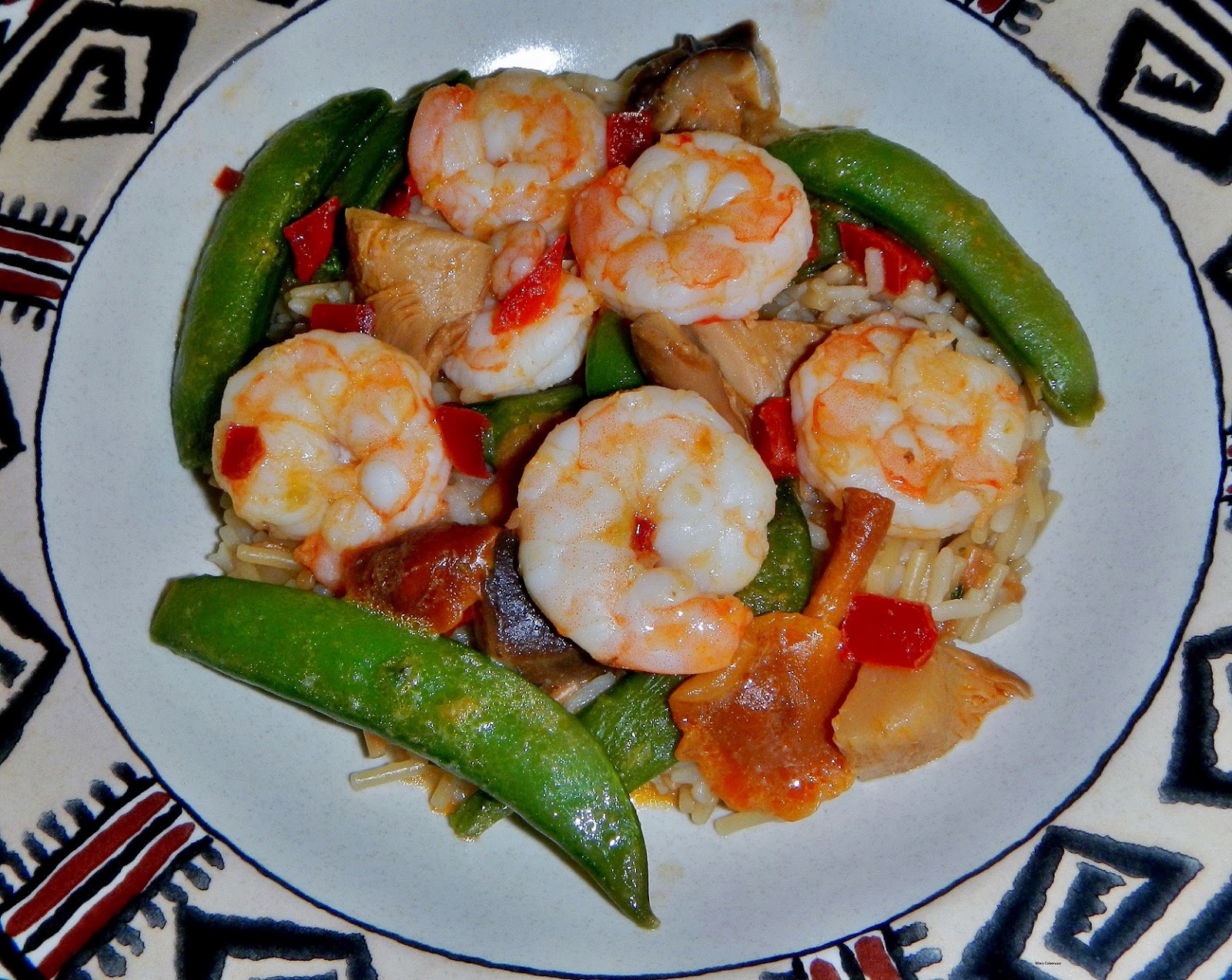 
Ingredients for the Rice: 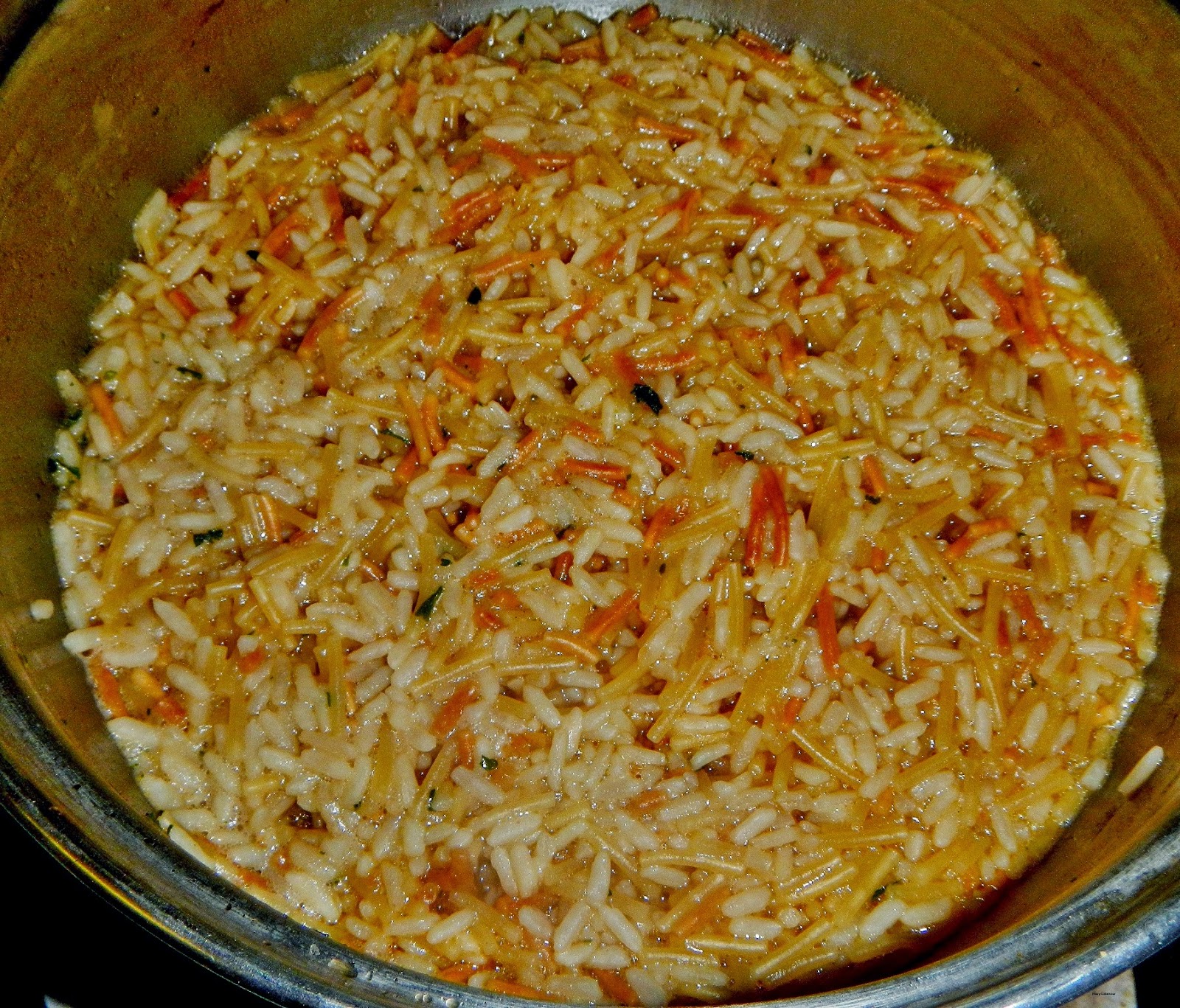 In a medium saucepan, on high heat, bring the rice, butter, broth and soy sauce to a boil.  Stir, reduce heat to low, cover, let simmer for 15 minutes.  Turn off heat, uncover and fluff up rice; any excess moisture will evaporate. 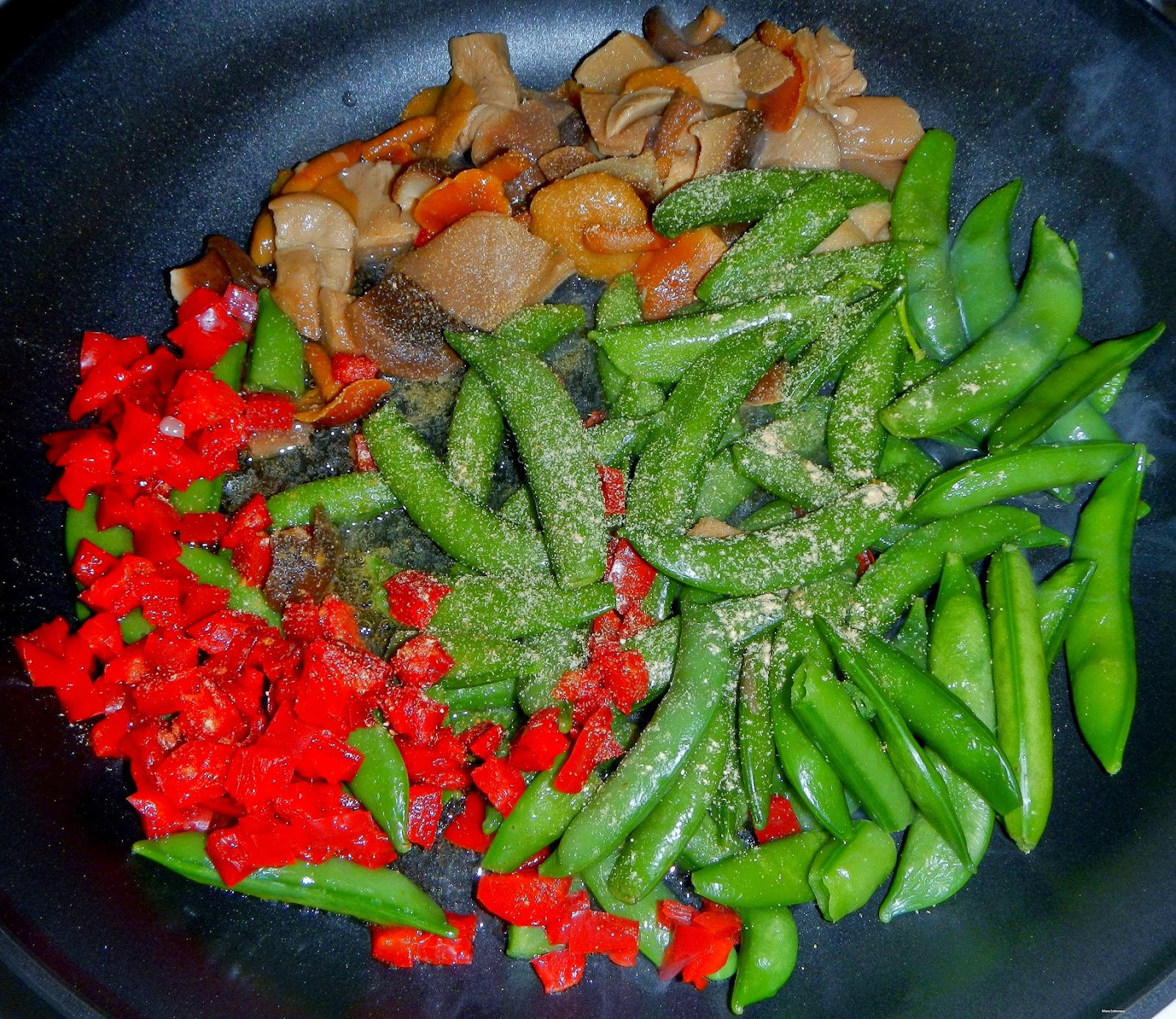 While rice is simmering, heat the oil in a 12 inch skillet over medium-high heat; add in bell peppers, mushrooms, snap peas, garlic powder and ginger; mix and cook for 3 minutes.  Add in shrimp, cook for 5 minutes; shrimp will begin turning pink, stir in lemon juice, cover and remove from heat.  Let mixture settle for 3 minutes; serve over rice. 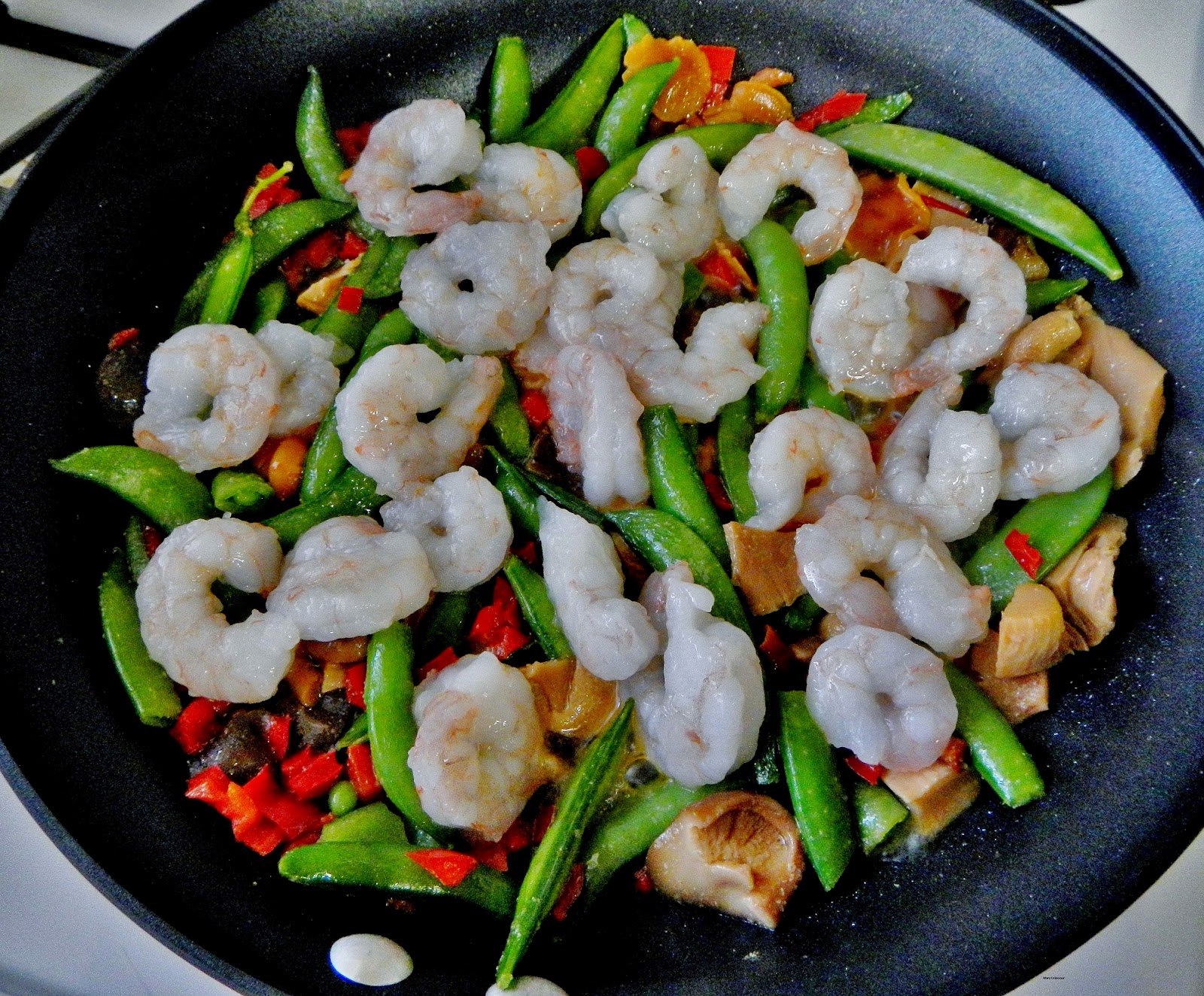 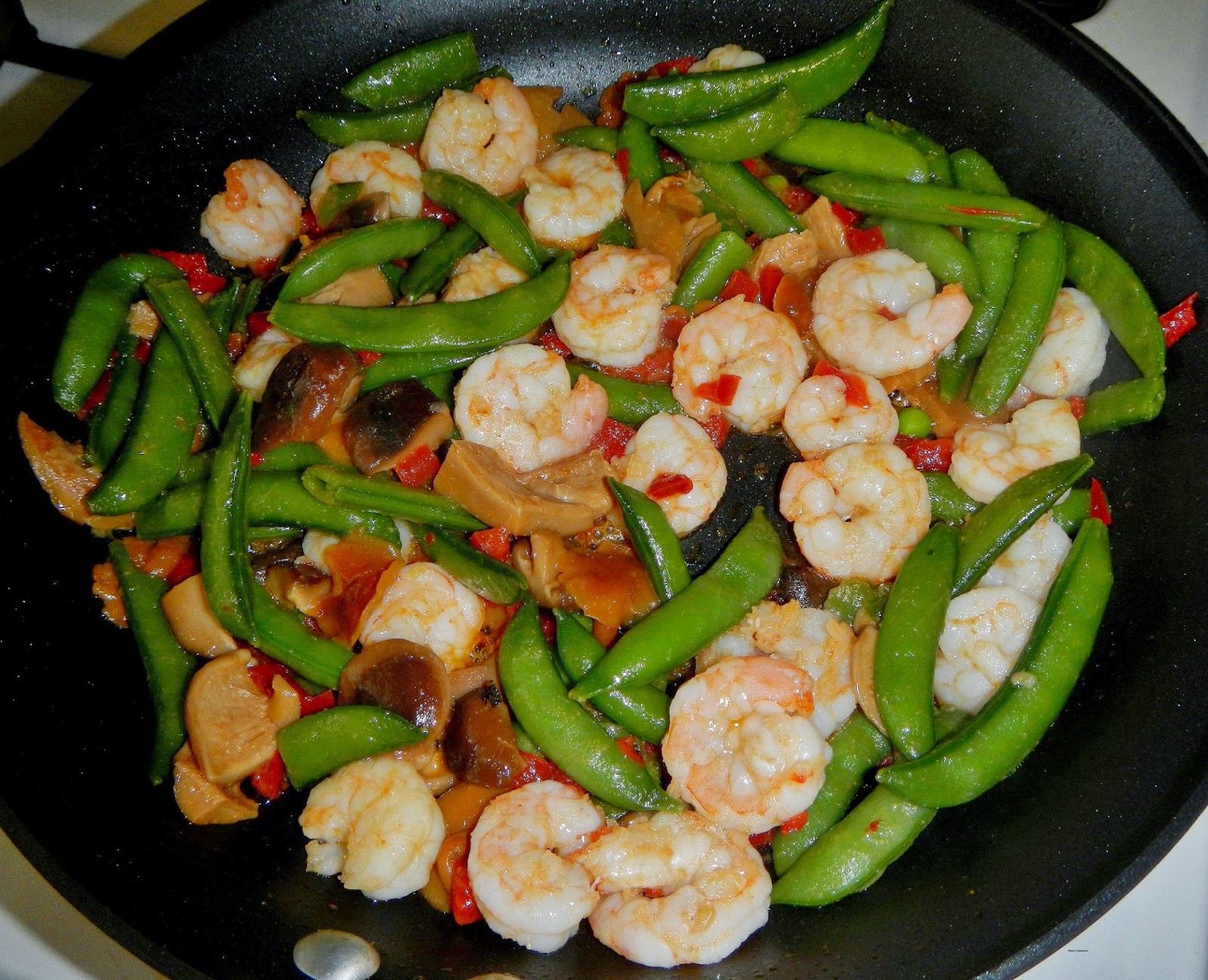