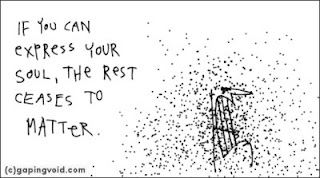 These are random thoughts that pop up in my mind occasionally; and they don't necessarily have anything to do with food or cooking.

When misery wants company, tell it you're too busy.
Stay happy!

When someone tries to break you, and you think you're going to crack;
the love you have for yourself is the best glue.

When people keep asking you to change aspects of yourself, and you comply to make them happy; you are no longer a whole you, but a disconnected puzzle of them.

When you always have a smile on your face, you make people wonder.
They wonder if you're a very happy person, or do you know something that they don't.

But when life gives you sour grapes, make marinade.

Becoming a clone of another takes the individuality away from two people.

Revel in your uniqueness.

To hear someone is to acknowledge they are making noise with their mouth.

To listen to someone is to understand the words they are communicating to you.

Burying your head in the sand leaves your butt in a very kickable position.

Imaginary transgressions; no arguing them cause the person having them is in la-la land,
so just nod and smile.


There will NEVER be total peace on this planet, so long as intolerance of religious beliefs, ethnic background, politics, race or sexual preference reigns supreme.  Someone will always have their feeling of superiority threatened and, therefore, feel the extreme need to attack and justify it as defense.

How you know someone truly cares about YOU: they EMBRACE your imperfections; they do NOT try to change you into someone you are not.

Stop wasting time in trying to make someone else change.  Instead, make the time more worthwhile by becoming more tolerant and understanding of others; in other words, change your self-righteous ways.

A smile can hide so much. If you truly care about a person, look behind their window dressing.

There is nothing wrong with submission, so long as it is by choice.  When it is dictated by religious doctrine, or management of a business over employees, then it becomes nothing more than a form of bullying.

We live in a world where we are forced to hide many aspects of ourselves; otherwise violence would be openly practiced upon us.

March 02, 2013
Sitting back and doing nothing gains nothing. Trying anything...a letter, email, phone call, fax, direct interaction...may still gain you nothing, but at least you can hold your head up high and say, "I tried. I did what I could to change a situation, and I may have failed, but at least I tried."

A majority of religious followers do so based upon the writings in a “Bible”.  A book written by a man, not handed to the man by a celestial being, but by a man who imparts into this book his own personal wants, needs, desires, lusts, fears, likes and dislikes.

My spiritual beliefs are nature based; I follow the beliefs and teachings that are centuries older than any organized religion.  Wherever I stand is Sacred Ground; I do not require a place of floor, roof and walls; I do not need a mortal leader to control my convictions, morals, beliefs and entire life.

So many people screaming that the presidential election was fixed somehow; but what about local elections, do they think this never happens in individual cities or small towns?  Sure it does!  What I find highly amusing though is the ones that fixed the election in the first place, their hand picked candidate turns on them, and votes the way he/she wants to NOT the way they were told to vote on issues.  Now that is priceless!