Located next to the busy Four Corners Inn, Homestead Steak House has a prime location when entering the city of Blanding, if traveling south on Rte 191.  Not knowing the area, you might not notice this little restaurant unless you see their sign advertising specials.  Inside, the décor is country kitchen with about 12 tables (6 seat 2 persons, 6 seat 4-6 persons) and a soup- salad bar area.  The kitchen entrance is blocked from the main dining area by a blue marble tile wall, but our table was situated nearby, and we were able to see the kitchen.  From a distance, it looked clean, and the cooking staff was busy, not standing around and making diners wait.

We arrived around 5pm, only about 6 other diners present, so seated ourselves while the waitress gathered up menus and utensils for us.  She was a very friendly person, and even though it got busy afterwards, was still smiling, and took time to answer any questions I had about the food items.  I need to note that by the time we left at 6:20 pm, the place was packed, there was another waitress working, and a line was beginning to form.  This is the type of small restaurant where you’re not rushed out, but don’t expect a quickie meal either, so make sure you’re going there with time on your hands.  Also, the portions are on the large size, so go there hungry or expect to take some home. 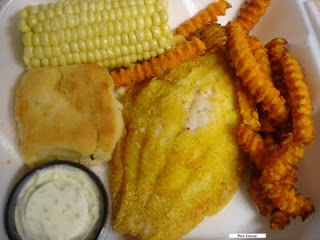 I ordered the Catfish dinner with corn on the cob, sweet potato fries and the soup-salad bar came with the meal.  We both chose the creamy potato-bacon soup which was packed with chunks of potatoes and shredded carrot; I saw no bacon, but could taste it.  The salad bar has a large and fresh selection; so if one wanted to order just the soup-salad bar as a meal, they certainly would not go hungry.  The catfish was encrusted in a lightly seasoned cornmeal which enhanced the taste of the fish itself.  The fish had been frozen and while it was mostly flaky, the center was on the mushy side giving the clue to its once frozen state.  The fries were crispy and tasty, but they too had once been frozen.  However, the food was cooked well, so not being totally fresh and homemade could be forgiven.

My husband ordered the Steak and Shrimp dinner with red skinned mashed potatoes and steamed mixed vegetables; soup-salad bar came with his meal also.  The steak was a good size, about 1 inch think and the grill taste was excellent; the steak was so tender, he didn’t even need a knife to cut it.  Only flaw was that he had ordered it medium and it was cooked medium rare instead. The shrimp was two skewers (5 grilled shrimp on each), lightly seasoned and also an excellent grill taste.  The mashed potatoes were the real deal; vegetables were the typical medley and nothing to write home about.

We also received a basket with hot biscuits, butter and sweet raspberry jam; very, very good.   The jam is yummy, and would go well over a nice slice of plain cheesecake.   Homestead is also known for their Navajo Tacos and Pizza (which does a large carry out service).

All in all, even though they call themselves a Steak House, Homestead reminds me more of a small town diner…decent food, large portions, friendly service and reasonable prices for what you receive.