Hiding Vegetables is not exactly a new concept.

So someone did a study on children and came up with the conclusion that if you hide vegetables in the meals you create, the kids won't know. Not exactly a new concept, especially for people who are good cooks and creative in the kitchen. Where was I when the grant money for this study was given out!?!

It doesn't work for just children, but for adults who don't like or won't eat their veggies. Personally, I'm very picky about what vegetables I eat, so I have to come up with recipes that can fool even me; and I'm the one who cooked the dish!

One vegetable I dislike is eggplant; I don't like the texture and it tastes bitter to me. I have only tried it in dishes where it has been fried in oil, and being the sponge that it is, the eggplant is oily in taste and texture. However, they do have nutritional value, low in calories and high in fiber, so how to include them in a recipe without having to fry them?

Well, two dishes I know how to make are Eggplant Lasagna and Eggplant Parmigiana which both involve the use of homemade pasta sauce.  Wonder what it would be like if I used the eggplant in the sauce as an ingredient, like tomatoes?  After a bit of trial and error, I discovered that it worked very well indeed, and the eggplant substituted as a thickener for the sauce instead of having to use tomato paste. 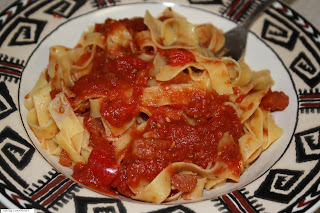 Even though the sauce works well with any pasta, I like to use a ribbon pasta such as Tagliatelle or Papardelle.  I leave the sauce chunky and any eggplant chunks have absorbed the flavors of the sauce itself, so no bitterness.  Being a homemade sauce, I control what I put in it; salt and sugar, like in jarred sauces, really have no place, since the ingredients used already contain them naturally. 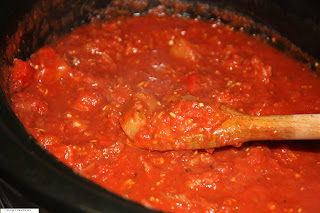 Vegetarian Pasta Sauce
Ingredients:
1 large onion, chopped
1 large red bell pepper, seeded and chopped
2 medium eggplants, peeled and cut into 1” cubes
3 (28 oz) cans crushed tomatoes
3 Tbsp Italian herb mix
4 garlic cloves, thinly sliced
¼ cup grated Romano cheese
Preparation:
Set a 6-qt crock pot on low; put all ingredients into crock pot, mix thoroughly and let cook for 8 hours.
Use an immersion blender or a potato masher in the crock pot to break up some of the eggplant chunks; this will thicken up the sauce.  The sauce will be chunky; if a smoother sauce is desired, use the immersion blender or potato masher until desired consistency is achieved.
Makes 5 quarts.
Mary Cokenour