A Tale of Two Dogs.

Last weekend was the one year anniversary of the death of our beloved Doberman Pinscher, Bonnie. I had written a blog post about her and her loss to us hoping that it would bring closure. Letting go is hard to do; it's easier said than done. To say that last weekend was hard to handle is an understatement as I was an emotional mess. Losing one of my pets is equal to someone losing a human child as they are as children to me.

Luckily, we were able to get in contact with Utah Doberman Rescue and the strange thing was that a female Doberman had been given up the same weekend that our Bonnie girl had died. Coincidence...I don't believe in coincidence; Bonnie left us knowing that there was someone out there who needed us badly. That someone was Jenna, a 5 1/5 year old female black and tan Doberman Pinscher that had been given up by her family. 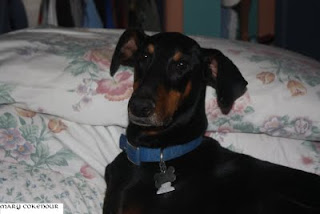 At first Jenna was shy, afraid to come up on the bed or couch, and did not bark. Now I had had experience with another dog like this, Lili, who had been beaten every time she barked, so knew how to handle this. We simply treated her as a member of the family, as if she had always been with us. Slowly, but surely, she began to understand that it was all right to act as her natural self. When she barked at a noise or a stranger near the home, we rewarded her; she doesn't excessively bark, only when she feels the need to warn and protect. She loves her comfort whether it is sleeping on the bed with us, on the couch while we watch television, or on the large dog pillow that is next to Roy's computer desk. Jenna loves to play with the cats and is quite gentle with them; and playing with Nefi and Tippy outside is a big thrill for her. Whether it is "chase me" or "soccer", they all get along great, share toys and love when they get treats.

So we have gone from a weekend of remembering sorrow and loss to a weekend of knowing joy and love. To help in the celebration of Jenna I planned a nice barbeque meal.

Mix together the bourbon, oil, honey and garlic powder; reserve 1/4 cup in plastic container and refrigerate.

Place meat and chicken in separate plastic bags or containers and pour remaining marinade over them. Seal and refrigerate for 24 hours; this will allow the marinade to not only flavor the meat and chicken, but to tenderize.

Day of barbeque, remove reserved marinade from refrigerator and allow to come to room temperature. Spray grill with nonstick spray and heat to 350F. Place meat and chicken on grill; cook until internal temperature on chicken is 180F and London broil is medium-rare. While they were cooking, baste with the reserved marinade. Set chicken on a plate; set meat on cutting board to rest for 5 minutes before slicing. 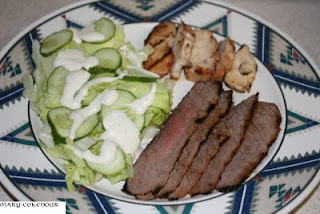 Posted by Mary Cokenour at 5:49 PM