Snow on the Driveway, Chowder in my Bowl.

All week the weather here in Monticello had been quite steady; cold at night, but sunny, clear and comfortable during the day.  The weather forecast for the weekend initially called for snow showers, but changed to rain showers.  My friend Heidi and I had made plans for today; I was to come down to her home and finally meet her mother Trish and Heidi's brother.  Trish, Heidi and I are friends on Facebook and we can get quite silly at times.  I had just purchased two Calphalon skillets and I had promised Trish that I would let her touch them.  Like I said, we get quite silly at times.

That was the plan until the snow began; first light flurries which didn't worry me too much.  My car doesn't like wet roads, but a light flurry wouldn't hinder her, yes my car is a her, and me.  Then the snow flakes got thicker and fell more heavily; it was sticking to everything and accumulating.  As much as I would have still liked to go to Heidi's, finding myself down in a canyon was not on my game plan, so had to cancel out on her.

With the wind blowing the snow here and there, it looked, and felt if you ventured outside, like a typical day for soup.  Ah, but what kind; a brothy soup would be nice, but a thicker soup would be more comforting I think.  Looking through the pantry, I find cans of whole baby clams which would go great with the shrimp I had defrosted the night before.  I originally was going to make a Thai dish with shrimp for dinner, but the snow just about changed everything  for the day.  So, to make it all better, I ended up making a shrimp and clam chowder chock full of shrimp, clams, potatoes and other yummy ingredients.  I've already had a bowl, and another bowl seems to be calling to me, so let me finish up and answer that call. 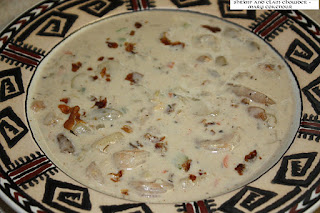 Drain potatoes and add with clams, thyme and shrimp to pot, cover and let cook for 10 minutes.

Posted by Mary Cokenour at 2:19 PM