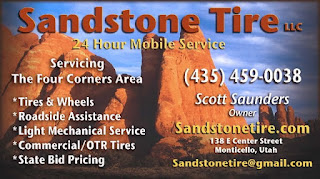 Two weeks ago I take my car to Sandstone Tires in Monticello, Utah because it would pull to the left, not a lot, but still it shouldn't be doing that; also it would shimmy between 50 to 60 miles/hour. They give me a wheel alignment and balancing, then tell me I need new rotors because that is what is causing the problems. Really? Anyway, not only does the car now pull to the left immediately, but the shimmy is constant.

My husband decides to take it to Chip's in Moab for another opinion; I need a new caliper disc to stop the shimmy, so the part was ordered. My two rear tires were so worn down, the metal was showing; I had already traveled to Cortez, Blanding and Moab since going to Sandstone. I could have blown both tires and who the heck knows what would have happened to me. Oh, and the rotors, they were fine and didn't need replacement.

Sandstone Tires brags about being the best tire place around...and they didn't notice the extremely poor condition of both tires!?! Looks like they were more interested in bilking me, than in doing a professional job. Avoid Sandstone Tires like your life depends on it....actually, it does.

UPDATE: On several occasions I called Sandstone Tire to speak with someone about the rotors, but was told each time "to call back later". When I called later, I was told the same thing again; since I was getting no satisfaction, I was forced to write this review.

Now someone has been trying to bully me into removing the review. Apparently this person is showing their lack of integrity by making threats. Is this supposed to be an example of maturity? Why is this person even getting involved in a situation that has nothing to do with him/her? That is correct, "him/her", as they do not have the, again, integrity to even sign their full name to the threat. As to Sandstone Tire, who are they to then go and give out personal information from my vehicle record to this person at all?

Sandstone Tire made a mistake that could have caused me an injury; they will not own up to it or take responsibility. The mistake was VERIFIED by an independent mechanic, so I have written only truth and facts in my review. As Jack Nicholson said in A Few Good Men, "you can't handle the truth!".

Update March 10, 2013 On March 9, 2013, the owner Scott S. posted this response on Yelp.com: Scott S. of Sandstone Tire 3/9/2013 Information was given correctly, Customers wish to get second option. I am glad to help those who need it and appreciate it. Its too bad that there are a few out there that can just never be happy. We offered to do the exact same work that was "done else where" but we only can only suggest if customer wants to go else where then that is there business. We offer only the best customer service possible, and all employee have professional training.

...and here was my response back to him: March 10, 2013 - The owner finally decides to speak up!?! Too bad he couldn't be bothered to speak with me when I called three times BEFORE the vehicle was taken elsewhere. Each time I called I was told, "We're busy and can't take a message now". Stop making excuses Scott; especially 7 months after the issue. The response of a good and responsible owner should have been, "I am so, so sorry this happened. I was not made aware of the problem by my employees; what can I do to rectify it?" But no, you're just pushing the blame onto the customer, displaying further unprofessional behavior, and proving my review is truthful. Thanks!

Posted by Four Corners Foodie at 8:03 AM