A Published Bon Appetit Recipe aka Tooting My Own Horn.

I have been entering recipe contests since 1994, and my first win was February 1995 for "Better Homes and Gardens" magazine.  I've won many times with them; had recipes featured in "Taste of Home" magazine, and its recipe books.  Heck, I've even been on television several times cooking up one of my recipes (local station, WGAL, in Lancaster, PA).  Then there was Bon "Appetit" magazine, now that's a coup, since this is a high end food magazine; but I had a few published.

After awhile, I started to enter less and less; Food Network Channel was teaching everyone and their mother how to be a celebrity chef.  Contest entries were looking for more unusual, and five star restaurant quality, recipes; home cooks, like myself, were falling to the wayside.  Good news though, I have been writing a food column for the local paper, San Juan Record, for a year now.  Besides being read throughout the entire San Juan County of Southeastern Utah; subscribed readers reside throughout the United States as well.  Besides my own recipes, I've been able to write about foods from the various cultures in the area (Native American and Mexican), as well as delve into recipes brought to the region by Pioneers, Cowboys, and travelers along the Old Spanish Trail. 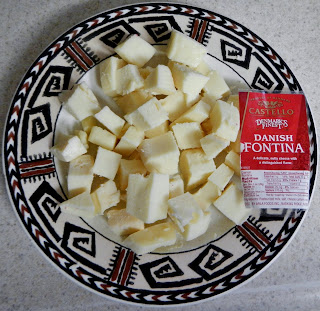 So, for the start of the New Year, I'm going to share with you one of those published recipes from "Bon Appetit"; Shrimp in Fontina Cheese and Dried Tomato Sauce.  Fontina cheese originated in Italy; cows fed a type of rich grass gives the cheese a mild, nutty flavor with a strong, distinctive aroma.  Danish Fontina is pale yellow, semi-soft with a mild slightly sweet flavor and less of an aroma; it is also much cheaper in price and more easily found in US supermarkets.  Either variety melts smoothly and easily, so perfect when making a cheese sauce.  Sun-dried tomatoes are just that; plum (Roma) tomatoes sliced thin and air dried in the sun (4-10 day process) which are then packaged, as is, in cellophane packets, or in jars of olive oil.  The tomatoes in the packets can be reconstituted in water, or crumbed up before adding to a recipe; the ones in olive oil can be used as is, but will add a little oil to your dish.  Which to use is distinctly up to the cook. 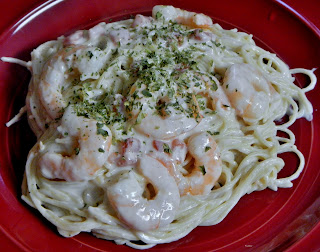 Shrimp in Fontina Cheese and Dried Tomato Sauce
“Bon Appétit” magazine published my recipe in their January 1997 issue, in the section called “Too Busy to Cook”. 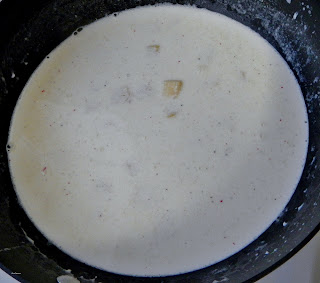 On medium heat, melt butter in a large skillet; sauté the onion until translucent; add the flour and mix thoroughly.


Add the half n’ half, Fontina cheese, sundried tomato and black pepper.  Bring to a boil; reduce heat to low.  Add the shrimp; simmer for 5-7 minutes; stirring occasionally.  Add in the pasta and parsley; toss to coat. 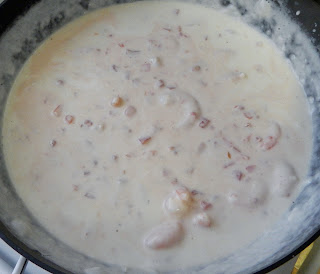 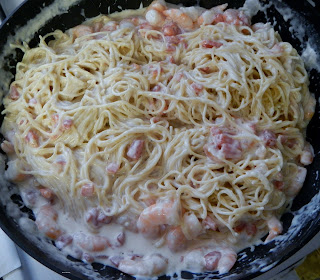 
2 large shallots for the white onion.
Provolone cheese for the Fontina cheese.
Oysters, clams or scallops for the shrimp.

Posted by Mary Cokenour at 2:59 PM