Giving the Devil His Due.

And if you'd care to take a dare, I'll make a bet with you

But give the devil his due

I'll bet a fiddle of gold against your soul

'Cause I think I'm better than you"

~The Devil Went Down to Georgia

What does “give the devil his due” actually mean?  It is said when admitting that someone disliked, or seen as bad/evil, does have some good qualities after all.  Basically, it is about perspective, whether looked at from a pure objective viewpoint, or influenced by the viewpoint of others.

When it comes to the term “devil”, the connotations can be from the most extreme: evil, vile, foul, lakes of fire, brimstone and eternity of agony. To mild, as in “little devil” meaning mischievous and annoying, but hopefully will grow out of it.  While this normally relates to human beings, it is a whole other meaning when related to food.

Travel back, with me, to ancient Rome and a traditional appetizer; eggs were boiled, seasoned with spicy sauces, and served at the beginning of meals.  In the novel, Satyricon, by Gaius Petronius, and written in late 1st century ADE, a wealthy Roman citizen throws a banquet.  The meat of songbirds is marinated in peppered egg yolks, then stuffed into the white part of boiled peahen eggs.  Eating all those eggs, no wonder the emperors and politicians were full of hot air; seems the norm for even today’s politicians.

As the Roman empire expanded, the availability of unusual spices became more readily available.  Mustard, pepper, paprika were being mixed into the egg yolks, and stuffed into the empty cavity of the white.  A hot tomato sauce called Arrabbiata (Italian for “angry) was made with dried red chili peppers, and ladled over the stuffed eggs.

A 13th century cookbook, from the southern, Andalusian regions of Spain contained a recipe of grinding boiled egg yolks with cilantro, onion juice, pepper, and coriander with a fermented fish sauce.  It was the 18th century English though that coined the term “deviled” for fried or boiled eggs that were highly seasoned, in other words, fiery hot.   A mild food, the egg, converted to a concoction that would burn the tongue, must have been a creation of the devil himself!

In America, an 1896 cookbook was the first to mention using mayonnaise as a way to bind ground egg yolks, leading to today’s classic recipe containing mayonnaise, mustard, and paprika.  Of course, using the devil’s name, in a recipe, was looked upon as unholy, so simply renamed as stuffed eggs, dressed eggs, or Russian eggs (due to the use of paprika).

One salad we enjoy is Deviled Egg Potato Salad, a mixture of the classical recipes of deviled eggs plus potato salad.  In the cookbook, The Mormon Pioneer Cookbook, 1995 edition, page 53 contains a recipe for this mixture, but is simply called, Hot Potato Salad.  Similar recipes appear in, What’s Cooking in Utah Kitchens, 1978, page 63, Potato Salad; and The Pioneer Cookbook, 2011, page 92, and also simply named, Potato Salad.

Well, I believe in giving credit where credit is due, and since I add cayenne pepper to my homemade salad, “devil” will be included in the name’s entirety.

Since All Hallows Eve, aka Halloween, is coming nye, perhaps serving up some of this salad, at your party, will keep all the demons and devils sated. 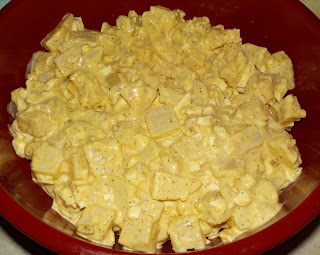 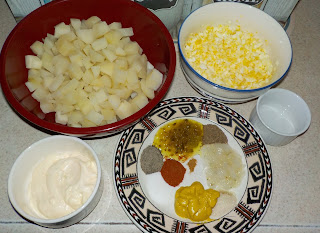 In a large bowl, mix all ingredients together thoroughly.  Can be served warm or cold.

Posted by Four Corners Foodie at 10:33 AM