The Rabbit Proclaims Luck for the New Year.

January 22, 2023 to February 9, 2024 is the calendar year of the rabbit, according to the Chinese zodiac.  The rabbit is the fourth, in the twelve-year cycle of animals, that appears in the Chinese zodiac, and is an earth symbol.

In the origin story of the zodiac, Rabbit was proud and arrogant about his speed. He was neighbors with Ox and always made fun of how slow Ox was. One day, the Jade Emperor said the zodiac order would be decided by which animals could cross the river, and arrive at his party. Rabbit set off at daybreak, but when he got to the river, no other animals were in sight.  Instead of going across, in his arrogance, he thought he would be thought of as first in line, just for showing up.  So, he laid down and took a nap.  However, when he woke up, three other animals had already crossed over to arrive at the party on time, and one of them was the Ox that he had always looked down upon.  How did Rabbit get across the river anyway?   He hopped along stepping stones, slipped and fell into the water, but was able to grab onto a floating log.  Dragon was flying overhead, took pity upon Rabbit, and blew air from his nose to help push the log across to the shore.  Rabbit came in fourth place, while Dragon came in fifth, due to his being so helpful to Rabbit.

Foods served for the New Year include longevity noodles for long life, a whole steamed fish for abundance, sticky rice balls for togetherness, and pork dumplings for good fortune.  While they are commonly known as dumplings in most Asian nations, other versions are Japanese gyoza or Korean mandoo.

In America, they are known as potstickers as that is exactly what they tend to do.  Potstickers are pan fried on the bottom and then steamed.  When they are served, the browned pan-fried side is shown.  Jiaozi is the Mandarin version; the dough is thicker than for a wonton and the dumpling itself is usually boiled and pan fried.  Gow Gee is the Cantonese version; wonton wrappers are frequently used, they can either be steamed or deep fried; no boiling involved.

The Chinese dumpling dates back to 200 B.C. to the fable of Pan Gu who ends the chaotic state of the world by separating it into two "half egg" shaped parts; the sky and the earth.  They are a staple for many Chinese celebrations, and express best wishes for happy days and good health.  It was not unusual for a trinket (coins or jewels) of some value to be hidden in a few dumplings; very similar to the prizes in the English Christmas pudding.

While making the dough for dumplings is not difficult, premade wrappers can be found in the fresh produce section at supermarkets.  Also available are wonton skins, or spring and eggroll wrappers.  Not up to making the dough, or even purchasing packaged wrappers; check the frozen food section for premade dumplings, follow the package directions, and enjoy the Chinese New Year!

Combine the flour and water until a soft dough forms; knead on a floured surface for five minutes.  Cover with a clean linen towel and let rest for 30 minutes.  Divide the dough in half, roll out each half into a 12-inch-long cylinder; cut into 1/2-inch slices.  Flatten out each slice with the palm of your hand, or use a rolling pin, to a 2 and 1/2-inch diameter.

The filling for dumplings is very versatile and can contain any kind of protein, vegetable or combinations; using fruit will give you the filling for a unique dessert item. 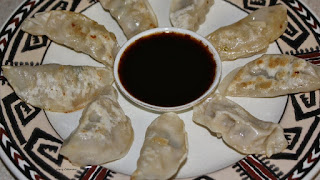 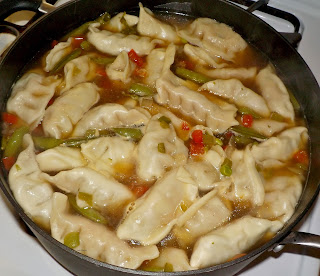 With the boil method, you can make a delicious soup by cooking the dumplings in a vegetable broth, and adding vegetables such as sugar snap peas, red bell pepper strips, and Bok choy, plus soy sauce and ground ginger.  Serve with a crispy egg roll as a side, and that is one delicious meal!

Posted by Four Corners Foodie at 11:14 AM