When life gives you lemons,

The saying ends with, “make lemonade”. That’s all well and good if you’re thirsty and in the mood for a tangy drink. Right now I’m in an angry mood; at other people, and at myself. A while ago I was alright for doing some favors for some folks. I was traveling back and forth between two towns, so it was on my way anyway. I don’t do that traveling so much anymore, maybe once or twice a month. That hasn’t dawned on these folks; well people, I have one thing to say, “Have you not noticed the price of gas lately?!?” It’s not just that; the favors have turned more into demands. When a favor is asked, the person being asked has the option to say yes or no. Now it has become, “I need you to do this!”; no option anymore, just a command.

Secondly, I once asked these folks to come on up my way, and do a favor for me. The response I got was, “We don’t have the time to waste.” Excuse me?!? So basically, what I’m being told is, it’s ok for me to waste my time and gasoline, but don’t expect the same from us. Hmm, interesting. So I’m basically angry about all this; and angry at myself for being the nice person too many times, and not stopping the favor doing earlier on. Sometimes it was an inconvenience, but I just let it slide…that was my fault, and I should have spoken up sooner.

I’ve experienced this in the past, and I guess people will say, “Well, that’s what you get for being nice.” I know and the next time I’m asked to do a “favor”, I’ll say no, and one of two things will happen. Number one, it will be ok, no big deal, maybe even an apology that I was taken advantage of a little. Number two; I’ll suddenly become the “not so nice person”, the bad guy who doesn’t want to help another person out. Let me tell you, I get more number two dumped on me than number one….pun intended. Oh well, we shall see, what we shall see.

Ok, I’ve gotten all this off my chest. Breathing deep and feeling a little better. Nirvana, however, is still out of my reach right now. Let’s take those lemons and make something a little tastier for the soul. 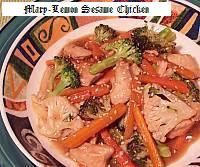 Before serving, sprinkle with sesame seeds.