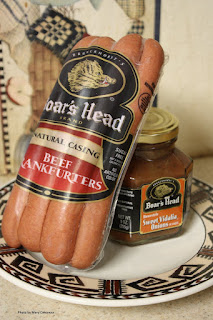 In 1905, Boar's Head Brand was founded in New York City by Frank Brunckhorst.  He began distributing quality delicatessen items via horse drawn wagons to "mom and pop" shops.  By 1933, the business had grown so large, that he opened up his own plant in Brooklyn, New York, so he could cure his own meats.

Anyone born and raised in New York, or in any surrounding area which featured Boar's Head Brand in their delis or supermarkets,  knows the quality.  It's the standard by which all other brands of deli meats and cheeses are judged.  Luckily, the City Market in Moab, Utah finally brought in this fine brand.  Moab is a huge tourist mecca, so I'll bet dollars to donuts that's the reason why; tourists were requesting Boar's Head when hitting the deli section of the store.

Take, for example, the Beef Frankfurters; all beef (first ingredient on the list), sugar, dairy and gluten free, in an all natural sheep casing.  Whether they're grilled, roasted in the oven or boiled in water you'll get that satisfying snap when biting into one.  Mildly seasoned (salt and paprika), so you'll get the real taste of the beef, not a lot of stage dressing. 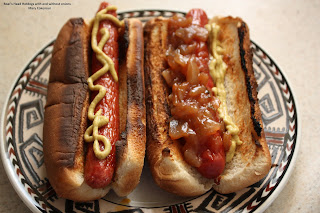 Looking for a great sandwich, try the various meats like the beef bologna.  Our favorite way is a toasted onion bagel, spicy brown mustard, American cheese and thinly sliced beef bologna.  Just wonderful!  No one in their right mind would even think of making a Reuben without using Boar's Head Brand corned beef, pastrami or roasted turkey and Swiss cheese.

Take it from this ex-New Yorker; you want quality deli meats and cheeses, go Boar's Head Brand or go without.