Humbled by a Potato

A dish I make infrequently is a potato wrapped fish filet; not that it is difficult to do, but I just don't think about it. That is one of the faults of wanting variety in cuisines and recipes; you don't think about dishes you've done up in the past.

I had defrosted some pollack filets and was going to fry them up dredged in panko crumbs, and have a potato dish as a side. The memory of the potato wrapped fish suddenly loomed up in my brain and I figured, "Why not?" 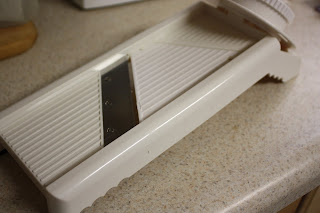 Now the key to remember for a proper potato wrapping is that the potato slices must be paper thin, almost to a translucent stage. Otherwise they will not be able to wrap around the fish and you'll end up having to layer instead. Still tasty, but very messy in the long run. I decided to try out using a Mandolin; from what I had seen in demonstrations, it was supposed to make my job of slicing potatoes easier. 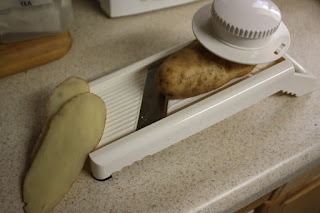 This model, no matter which slicing insertion plate I used, would only slice 1/4 inches; I needed much, much thinner. I needed a better model which would allow me to dial to the proper thinness, but that wouldn't help me out now. Mothers' Day is coming up, so besides a Pizzelle Press, I'm hoping my son will find a better model of Mandolin for me. Until then, I got out my old standby, my 4 sided grated and used the slicing side as best as I could, without slicing skin off my hand.

Before I go further, let me tell you what you'll need: 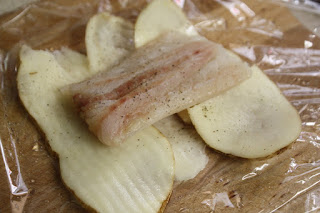 Lets get back to the prepping. On top of a square of plastic wrap, lay 3 potato slices side by side, slightly overlapping. Place the fish in the center and sprinkle salt and pepper overall. Lift one side of the plastic over so the top long ends of the potatoes wrap over the fish. Repeat with the other long side, but make sure no plastic gets tucked in with the fish or potatoes. Wrap the ends of plastic over the seam and you've created a little packet. 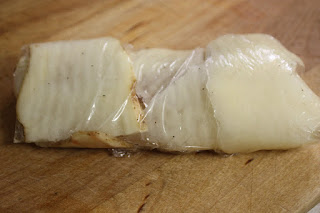 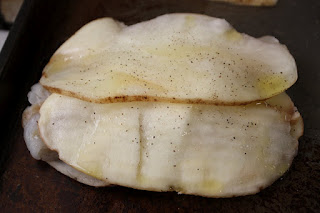 I was only able to get a few slices thin enough for a wrap, so while two filets were wrapped, I ended up doing a layer for the other two. Basically, plastic wrap, slices on plastic, fish filet, salt, pepper, but another layer of potato slices on top; wrap plastic around all. I put the bundles into the refrigerator for a half hour to allow them to firm up.

Normally I would put about a 1/2 inch of oil in a skillet, medium-high heat, and fry the bundles till browned on one side; carefully turn them over and brown on the other side; about 5-6 minutes each side. However, I decided to see what would happen if I put them under the broiler instead. I had already messed up on the potato slices, how much worse could it get, right? 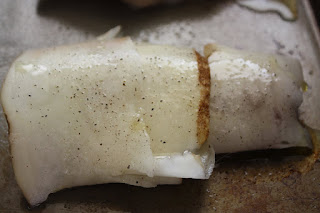 I drizzled a teaspoon of olive oil over each bundle and sprinled a little salt and pepper over them; basically for good luck. Under the broiler the tray went for eight minutes. 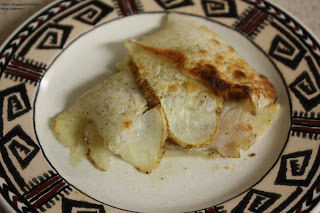 The results for the wrapped and layered filets were basically the same. While the top potato layers browned and crisped, the bottom removed raw. The fish, however, was flaky and well seasoned, so not a total disaster. 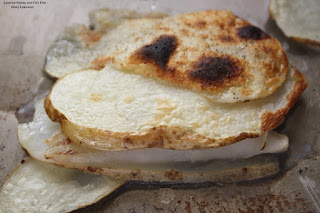 I learned from this adventure to make sure you have the correct tools and that they work properly. When prepping the food, if you're not satisfied with the results; start from scratch. Also, with this type of dish, frying in oil will give better results than using a broiler.

Posted by Mary Cokenour at 3:25 PM