Pizzaiola is a Neapolitan style of cooking cheaper cuts of meat in a sauce of tomatoes, olive oil and oregano; some versions include garlic, capers, peppers and basil. It is a way of making a hardy meal with what little you have to work with. So on to my story...

I had recently purchased 3 round steaks that were thinly cut to 1/4 inch thick; I'd had a recipe in mind for them, but then suddenly I was in the mood for pizzaiola.  I made it several times during my first marriage, but my ex-husband always hated it.  Funny thing about him was, his ancestry was Italian and he disliked Italian foods.  Should have known right then there was something not quite right about him, but he died four years after our divorce, so that's water under the bridge.  Anyway, back to the pizzaiola which I typically made with chuck steak which was cheaper, but also fattier in texture.  Here I was about to embark on a new adventure into pizzaiola making and I was going to make it a luxurious cruise.

Inside my freezer were one quart containers of both homemade pasta sauce and vegetarian pasta sauce. The homemade pasta sauce would work since it contained mostly tomatoes and Italian herbs; however I was looking to ump this dish up to the maximum. After deciding to choose the vegetarian pasta sauce, I then hit the vegetable bin: tomatoes, onions, green zucchini, mushrooms and green bell pepper. The colors would be amazing in the skillet, simmering in my rich sauce with slices of steak.

Now lets put this masterpiece together, shall we? 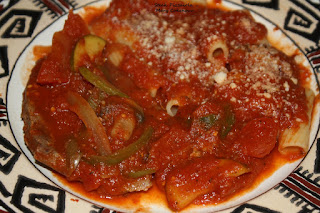 I served my pizzaiola with rigatoni; this tubular pasta with ridges caught onto and held the sauce so well. 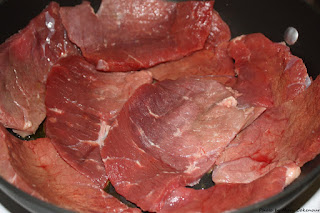 So like I mentioned before, I used 2 1/2 lbs of thinly cut round steak which I cut into 9 separate pieces (they were large steaks). Whatever cut you use, the steak will be simmering and finishing off in your sauce. 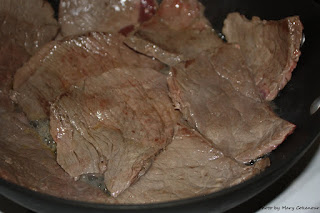 You want to use a large, deep skillet for this dish; get it very hot and put a sear on your meat. Round steak is not very fatty, so I left in just long enough to get the sear, but not cook it completely. Fattier meats will take a bit longer and you want to discard the melted fat, or you'll end up with an oil slick on your sauce. Yuck! 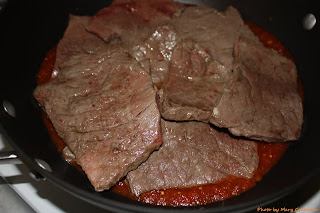 Remove the steaks, give the skillet a wipe down with a paper towel; now spread 2 cups of sauce in the pan and lay the steaks on top of the sauce. 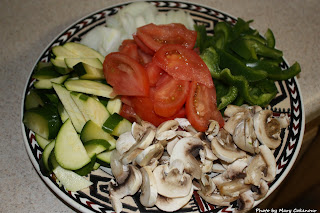 When I made this recipe before, I would just use sliced onions, but this time I was going for the whole color palette. Two tomatoes cut into wedges, 1/4 lb of sliced white mushrooms, two sliced zucchini, one julienned green bell pepper, one sliced large onion. There was no need for extra minced garlic or Italian herbs as it was already in my sauce. Yes, yes, all these vegetables were already in the vegetarian pasta sauce, but they had been cooked down and pureed. We were going for texture here. 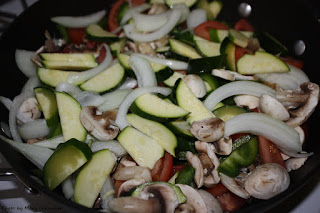 Spread the vegetables over the steak. 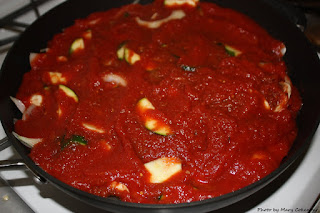 Spread remaining sauce over all and work it between the vegetables with a spoon.   Remember, I used a one quart container of sauce. 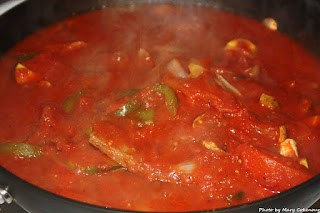 Cover the skillet with a lid, set the heat on medium-low and let it cook for two hours. Occasionally stir the sauce throughout the vegetables and steak; if the sauce is bubbling hard and splattering, reduce the heat to low. Since it will be cooking for two hours, you don't have to rush to make your pasta, but have it ready once the pizzaiola is done. Use a slotted spoon to remove the steaks and as much of the veggies as you can to a serving platter. Take your cooked pasta and immerse it into the sauce remaining in the skillet and let it cook together for about five minutes. This will allow the pasta to pick up the flavors from the sauce.

I only got eight servings of steak as my current husband stole another piece of meat while I wasn't looking. I just love that man, and he so loves my cooking. Wish you could see the big grin on my face as I thought about that time and wrote about it for you.

Anyway, if you want to impress your family and/or guests, consider making this Italian dish. Enjoy!