Bees, Hives and a Taste of Honey.

Utah, the Beehive State, adopted the symbol of the beehive onto its state flag and seal in 1847; representing the qualities of industry, perseverance, thrift, stability, and self-reliance. For the Mormon settlers, who definitely had to live these qualities to survive the unforgiving Wild West, it also meant a deeper connection to their beliefs. Within the Book of Mormon, the name Deseret meant “honeybee”, being derived from the Jaredites; a group believed to have been led to the Americas during the time of the construction of the Tower of Babel. While Christopher Columbus is given major credit for discovering the Americas and archaeological finds place the Vikings here first; let the historians battle out “Who’s On First?”

In many recipes of Native American origin, honey was included; so it would make sense to believe that honeybees were indigenous to the Americas, and you would be only slightly correct. In 2009, paleontologist-entomologist Michael Engel, of the University of Kansas, discovered fossilized remains in Nevada of 14 million year old honeybees which did not survive the Ice Age. (Reference: http://ucanr.edu/blogs/blogcore/postdetail.cfm?postnum=1544 ) It was not until 1622 when white settlers brought over European honey bees; referred to as “white man’s flies” by the local Native American tribes. Bee migration, via swarming, began on the east coast of North America; colonies finally arrived in the West by the middle 1800s. Therefore, honey became an active ingredient in Native cooking along with white flour, sugar and lard; all thanks to the pioneers. (Reference: https://www.agriculture.purdue.edu/agcomm/newscolumns/archives/OSL/1999/November/111199OSL.html ) 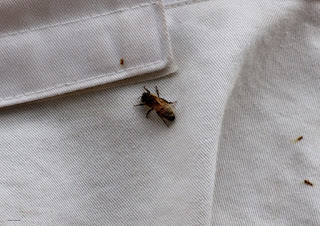 Bees produce honey, honey is sweet and tastes really good; is that all there is to honey bees? Bees produce - pollen, wax, royal jelly, propolis, honey and bee bread which are chock full of nutritional and health benefits for humans. While not being all that nutritionally balanced, from fermented honey, an alcoholic drink, called mead (Go Vikings!) can be enjoyed. The importance of bees goes beyond the human need of their byproducts; 1/6th of plant pollination worldwide is attributed to bees. Besides bees in the wild, local beekeepers provide a great service in maintaining hives, and coordinating with other beekeepers. 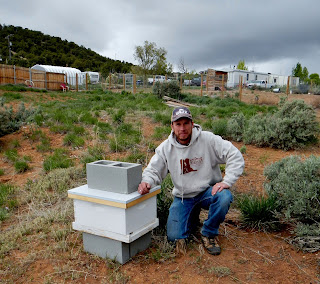 One such beekeeper is local Blanding resident, Ricky Arthur (also co-owner of Patio Drive-In with his wife, Lana). Ricky graciously invited my husband, Roy, and I to visit his hives, introduce us to the honey bees, and give us loads of information. Within each of the hives, a single queen (fed on royal jelly only) emerges to hold reign over the workers (fed bee bread). Did you know that a queen can be dethroned? After a queen lays eggs, multiple females can hatch; one will be the strongest, kill the others and she is the “virgin queen” who will mate with drones. However, the workers watch her progress and if her behavior somehow puts the hive in jeopardy, another queen will be put in her place. Queens will travel as far as 3 to 5 miles to mate with drones from other hives, so as to not mate with her own. Within each hive (colony) live 50, 000 to 100, 000; all constantly gathering pollen and nectar; taking care of the queen and her eggs; many die each day and the colony continues on….busy, busy, busy. 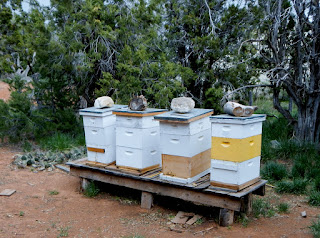 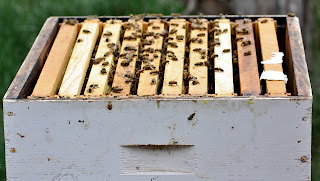 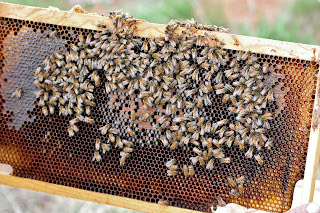 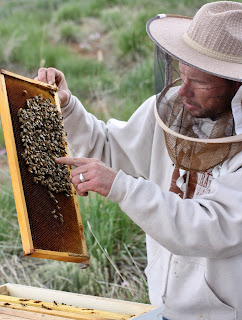 Honey is ready for eating within 3 to 5 days; tastes and scents all dependent upon what flowers were blooming. For example, in spring, the pollen from flowering fruit trees will be much different from those of clover, dandelions, flowers and flowering vegetable plants in summer. Have you ever been tasted by a bee? No, not stung, but tasted and I experienced such an instance at a lavender farm back in Pennsylvania. Bees like salt, so one decided I would be a nice “salt lick”; it was just a little pinch and imagine my surprise that others around me felt cheated at not being chosen. 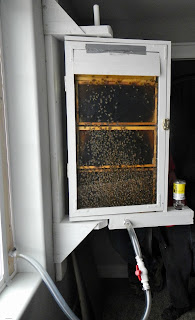 Currently, Ricky Arthur’s hives provide enough honey for personal family use; however he is hoping to expand out eventually to create a small business. Anyone interested in beekeeping, and becoming a bee farmer, is very welcomed to contact Ricky at: (435) 260-2393. By the way, Ricky loves his bees and you can hear the passion in his voice when he speaks about them. He also created a glass enclosed hive which he keeps inside his home; he will proudly display it and describe the inner workings. 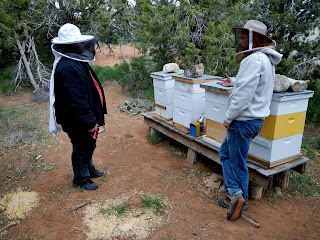 To see the bees in action, go to: https://youtu.be/D-teH-b6vyU created by Desert Stone Studio; my husband Roy’s new videography and visual effects business, or see the video above.

So plant those flowers and fruit trees, do NOT use pesticides, let the dandelions bloom, do NOT swat those precious honey bees…our very existence depends on their work ethics.

Posted by Four Corners Foodie at 11:44 AM