Take, for example, a thunderstorm brewing and suddenly taken back to a childhood memory. During such storms, I would put four chairs in a square formation, throw a large blanket over them and pretend to be camping outdoors. Some of you probably did the same thing, but called it “playing fort”.  I would have my favorite stuffed animals as company, a flashlight to light the interior, books to read and a large bowl of one of my grandmother's home cooked meals. It could be spaghetti and meatballs, shrimps in sauce over spaghetti, or one of her many delicious soups. Whatever it was, it was wonderful and I would always sneak out of my tent (between thunderclaps) to get a second bowl.

My grandmother's cooking was able to provide me with, not just comforting moments, but comforting memories to help me later on. One such dish was her Paste E Fagioli; a wonderful dish of beans, meat and pasta in a flavorful broth. The steam rising up from the bowl, so fantasy figures could be picked out, much like one would do when watching the clouds in the sky.  Problems are set aside momentarily while the senses take in the taste, texture, smell and overall good feel of the food being consumed.  Oh, the problems are still there, but now a calm has been reached.  The mind and body, instead of knee-jerk reacting, can deal in a more orderly manner; or that is what we hope for.

While Pasta e Fagioli (meaning pasta and beans) is a typically Italian soup, recipes can be found as far as the Alps, and stretching all through the Mediterranean.   Originally, the scarcity of meat made this a vegetarian meal with the starchiness of the beans, maybe potatoes too, giving a thicker consistency.  As cattle, pigs and sheep became more plentiful, additions of these meats elevated the quality of the soup.  Think of this recipe as an example of the story, “Stone Soup”; whatever is at hand can be placed in the pot, all combining for a delicious meal.  My grandmother made this soup in a large stock pot on the stovetop, but I have converted it for cooking in a crock pot.  The stovetop method took hours; stirring and checking to make sure nothing stuck to the bottom and burned.  The crock pot method still takes long hours of cooking, but “setting and forgetting” is less stressful. 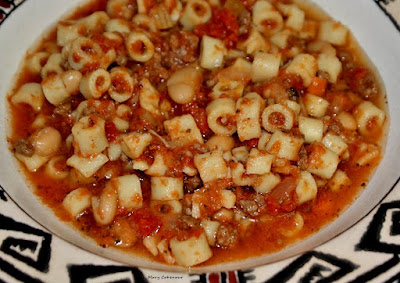 8 oz. ditilini pasta, cooked before adding to the crock pot

Spray 6-quart crock pot with non-stick spray. Mix together meat and all ingredients, except the pasta. Set on low heat and cook for 7 hours; add in pasta and cook another 15 minutes before serving. If desired, grated Parmesan cheese can be sprinkled on top of each serving.