When it comes to food, it seems that more peaceful moments are shared around the dining table.  Picture it, 1840s, France brings thinly sliced veal, covered in breadcrumbs and fried to a crisp, golden brown.  Russia cannot afford veal, but chicken is plentiful, so they decide to do the same style of cooking to chicken breasts.  Germany simply sits there, a smirk on the face, and declares, “You have copied our Schnitzel!”

But wait, time warp jump to the left, then take a step to the right, and we are in the 1940s.  Since Switzerland is a neutral country, during World War 2, it is not suffering the same food shortages, and horrors, of the war.  Switzerland is a mixture of four origins: German, French, Italian, and Romansh (official national language of the Swiss), and with languages comes culture and cuisines.  They took the “schnitzel style” meat, layered ham and cheese on top of the chicken, rolled it, and then deep fried it.  The word “bleu” refers to “blue ribbon” which was a wide blue ribbon, worn by the members of the highest order of the French knighthood, L’Ordre des chevaliers du Saint-Esprit, since the year 1578.  Basically, the Swiss took creative license, with what we know as Chicken Cordon Bleu, from the influences of France, Russia and Germany.

The first reference of this recipe, in America, was in the New York Times, 1967.  However, American cookbooks, chefs and home cooks were already making their own versions.  The addition of Dijon mustard gave it more of a French flair, while Alfredo sauce gave the Italians a hold of the plate.  However, the cheese was still Swiss, and bleu cheese was only in side salads.

Then comes along this home cook, and she decided to make a complete meal, including vegetable, in one pot, a crock pot.  My invention is the Chicken Cordon Bleu Casserole.  I still used chicken and Swiss cheese, but paid homage to Germany by using Black Forest Ham.  This type of ham has blackened skin and light, smoky flavor.  The blackened skin comes from the spices (salt, garlic, coriander, juniper and pepper) that is applied, and smoked over pine or fir.  The process takes up to three months, and the origin is, of course, from the Black Forest area of Germany.

Side note; if you have never visited Germany, I highly recommend a visit to the beautiful city of Munich, and the Black Forest.  Then take a side trip, only five hours east, to the Bavaria Alps, and visit Neuschwanstein Castle, home of the Mad King, Ludwig.  Back to the recipe…

I did Americanize the recipe by using cornbread stuffing, for a southern touch, and using “cream of” soups for convenience.  This is a layered casserole, but cooks up completely in only four hours, on a low setting.  While enjoying your meal, let your mind wander off to Europe and visit all the countries that inspired the original recipe. 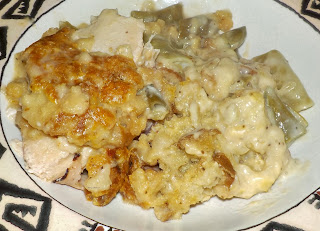 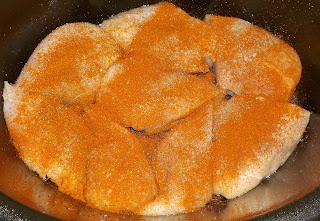 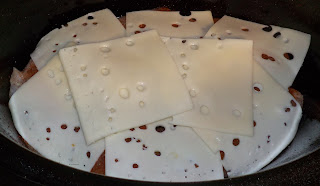 Layer cheese over chicken, ham over the cheese, then stuffing over the ham.  In large bowl, whisk together soups, milk, mustard, and celery seed till smooth and well combined; pour over stuffing.  Spread out green beans over the sauce. 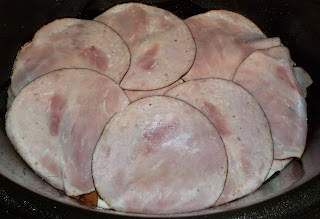 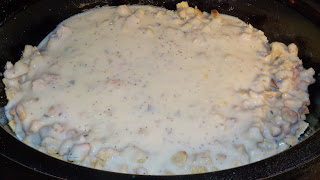 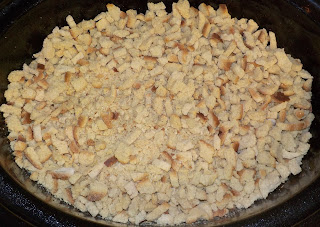 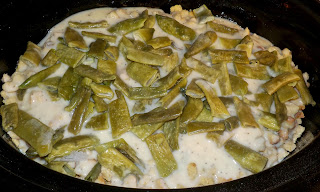 Cover crock pot, set to low, and meal will be completely cooked in four hours.

Posted by Four Corners Foodie at 9:48 AM