When Life Gives You Lemons, Eat Them.

“When life gives you lemons, make lemonade” is a proverbial phrase used to encourage optimism and a positive can-do attitude in the face of adversity or misfortune. Lemons suggest sourness or difficulty in life; making lemonade is turning them into something positive or desirable.”  (Theidioms.com. The Idioms. Retrieved June 16, 2020.)

Although many attribute the lemons to lemonade quote to Dale Carnegie, it was originally penned by Christian anarchist writer, Elbert Hubbard, in a 1915 obituary he wrote and published for dwarf actor, Marshall Pinckney Wilder.  It was praising the actor for having an intelligent mind, and overcoming his disabilities, to achieve whatever he put his mind to.

Considering that adversity and misfortune seem to have taken a stronghold on our world, and definitely within the United States, seeking positivity is essential to keeping our sanity.  No, drinking lemonade will not solve the drastic problems we are facing, however, could a bit of sweetness hurt?  When was the last time children were seen hosting a lemonade stand?  Neighbors, even strangers, buying a cup full; the children’s faces lighting up in smiles as their tip jar filled.  But it was not just the notion of helping out the kids, but also standing around and having conversations.  Real conversations that usually covered, not just the local weather and events, but the world in general.  Just something to consider as the months begin to warm up; the kids are bored, so why not teach them to make lemonade, and become a little business savvy as well?

Now back in June 2020, I wrote about lemon bars, and gave a recipe for Creamy Lemon Squares.  That’s correct, instead of drinking lemons, we were eating them…with sugar, graham crackers and condensed milk.  However, and I have said it many times before, I just cannot let recipes be.  There I was, in the kitchen pulling out the ingredients to make the lemon squares when Roy made a suggestion, of sorts.  “Honey”, he said, “I like your lemon bars, but I would really love to have cheesecake.  You haven’t made any since the holidays, so….”  I cocked an eye at him, cocked an eye at the recipe, and there I stood, cockeyed.  (Kind of stole this line from comedian, Tommy Cooper)

So, after some experimenting, referring to cheesecake and lemon bar recipes, a disaster here and there, behold, Lemon Bar Cheesecake!  Amazing what can be accomplished in two years, lemon bars to lemon bar cheesecake. 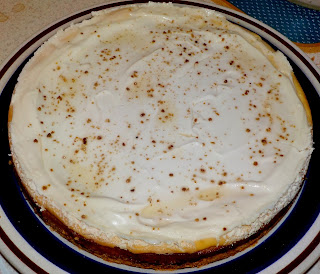 In a small bowl, combine butter, crumbs and sugar; spread out evenly in bottom of pan, and up sides.  Bake in oven for 10 minutes, remove and let cool.

In a large bowl, beat eggs, condensed milk and cream cheese until smooth.  Add lemon juice and vanilla and combine thoroughly.  Pour over cooled crust; bake for one hour.  Turn off oven, open door slightly and let cheesecake cool, in oven, for a half hour.   Cover pan with plastic wrap, refrigerate overnight.

...and here's a photo of a typical Lemon Bar dessert. 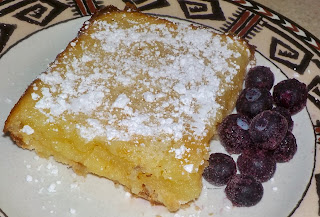 Posted by Four Corners Foodie at 11:17 AM