As 2022 comes to its end, we come to a beginning.  We make resolutions, promises to ourselves, that we will be someone better in the new year.  I, of course, do not make such resolutions.  Oh no, I maintain that I will continue to be the same witty, sarcastic and snarky woman you have all come to know and love.

…and with that, I introduce to you all, to, December 30th – National Bacon Day!  Now this is the way to welcome in the new year, with bacon!  There is just something about the smell and taste of bacon that makes whatever it is put on, or in, simply delicious. Bacon is a pork product; a salt cured and smoked part of the pig which comes from the sides or the belly of the beast. The many varieties of bacon are dependent on the parts used and the techniques to preserve it.

Bacon itself has very little meat to it; it is the fat that gives bacon products most of the flavor and richness; also, its crispiness after frying. Before frying, some of the fat can be removed, frozen and saved for later use. The fat left in a fry pan solidifies at room temperature and can be used like lard or vegetable shortening to flavor biscuits, cornbread, and dressings.  Roy loves fresh green beans, especially after I have fried them up in bacon grease.  Can you hear his arteries hardening? 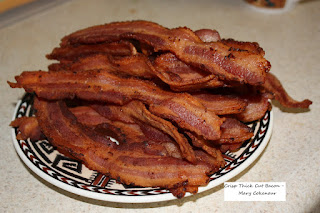 In America, the typical bacon product used is either thin or thick strips. The thin strips, depending on brand quality, can almost be paper thin; frying up very quickly and leaving behind more oil than a cook knows what to do with. One batch I made recently started out as ten-inch strips and quickly whittled down to crispy, melt in the mouth, snack pieces of three inches.  Prime example of, “you get what you pay for”, since the packages were cheaply priced, and now I know why.

The cut of bacon we prefer is thick; more meaty than thin, less fat which makes more for the eating. The typical ten-inch pieces only shrink down to about seven inches; they do not take longer to fry up either. In a 12-inch skillet, high heat, I was able to cook 6-7 pieces in each batch; each batch took only 8 minutes to fry up to delicious crispiness.

Bacon is often used as a sandwich addition, the most popular is the "BLT" or "Bacon, Lettuce and Tomato". I am not a fan of the raw tomato part as I believe the juice of the tomato simply takes away from the crispiness of the bacon, lettuce and toasted bread. For moisture, I slather on a generous dose of mayonnaise on both slices of bread.

Other cuts of bacon popular in, or finding its niche in, USA cooking and baking are Canadian which comes from the back center (or eye of the round). It is more similar to a traditional ham product than bacon; and if you have eaten an "Egg McMuffin" from McDonald's, than you know what I am referring to. From Italy, Pancetta is a non-smoked, cut extremely thin bacon which will add the mild taste of pork without the smokiness of smoked bacon; sometimes it comes flavored with herbs and spices.  A classic Italian dish which features pancetta is Carbonara; pasta coated in a rich and creamy pancetta and egg sauce.

Basically, no matter how you like your bacon, well what can I say, "It's Bacon!!!".

Need a recipe to welcome in the new year, how about Bacon Wrapped Meatloaf with a Mexican twist?  This is one of those recipes where I was supposed to make one item, but felt it was boring and needed something more. Instead of plain meatloaf, I decided to use the recipe for Tamale Stuffed Peppers, and add, what else, bacon!

First major decision made was to use a roasting pan with a rack instead of a baking dish. Lining the pan with aluminum foil, rack inserted, but also put a sheet of foil over the rack.  Pricking a few holes here and there on the sheet allowed any excess oil to drip through; the meatloaf would not absorb the excess oil, or cook in it and burn the bottom.  The foil also kept the meat mixture from dropping through and falling apart.

Second decision was to trim the slices of bacon and not tuck them under the meat mixture. Being hidden from the heat would keep them undercooked and bacon needs to be crispy.

The bacon added moisture to the lean ground beef, cut easily without crumbling and did not stick to the foil at all. Every bite was infused with the maple flavor of the bacon; but still able to experience the flavors of the Mexican ingredients too. As a garnish, some cool, freshly made salsa was just right. 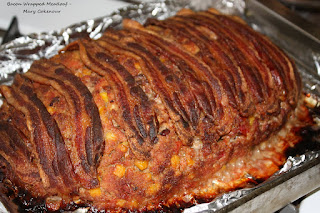 1 cup each diced onions and tomatoes 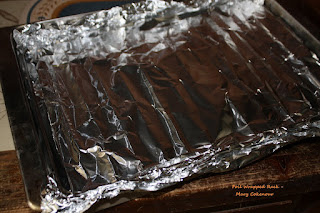 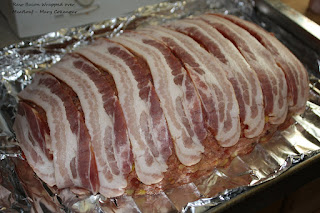 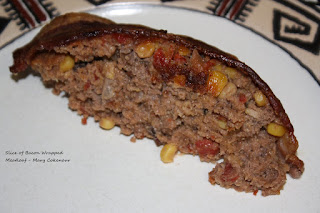 Posted by Four Corners Foodie at 10:49 AM