School’s Out, but Lunch is In.

“School's out for summer

No more pencils, no more books

Out for summer, out 'til fall”

When this song first came out, radio stations either refused to play it, or were pressured not to by school officials and parents. The lyrics made it sound as if children were being told to be rebellious, disrespectful to teachers, and pushed towards violence (sound of an explosion at end of the song).

Then there were those who thought it was an anti-Vietnam War anthem with the words:

“We can't salute ya

If that don't suit ya

…and “We might not come back at all” meant they went off to fight, and died in a war the United States should not have been involved in.

Alice Cooper (yes, I am a big fan of his music and theatrics) could have cleared up all the misnomers if asked though.  The title and lyrics were inspired by a warning often said in Bowery Boys movies in which one of the characters declares to another, "School is out," meaning "to wise up." The Bowery Boys were characters featured in 48 movies that ran from 1946-1958. They were young tough guys in New York City who were always finding trouble.  Oh, and I grew up watching the Bowery Boys reruns on Sunday afternoons, along with Abbott and Costello and Laurel and Hardy.  I loved them all!

But I digress…Alice Cooper also stated, answering the question, “What is the greatest three minutes of your life?”:  "There's two times during the year. One is Christmas morning, when you're just getting ready to open the presents. The greed factor is right there. The next one is the last three minutes of the last day of school when you're sitting there and it's like a slow fuse burning. I said, 'If we can catch that three minutes in a song, it's going to be so big.'" ("School's Out" Forever: The Secret History of Alice Cooper's Classic". Deadspin. May 21, 2015)

Being in school effects everyone differently; some have the greatest time while others cannot wait to get away from the entire system.  When that final bell rings in May or June, it indicates freedom and the beginning of summer fun.  However, there is one thing that might just be missed, and that is the school lunch.  Whether brought from home, or purchased in the school cafeteria, it was, between a half hour to one hour, of enjoying a meal with friends and classmates.

Now when I was in elementary school, it was a strict Catholic school where meals were not offered for purchase, only milk and snacks.  There were lunch ladies, but they created meals for the nuns, priests and teachers before monitoring the children in the lunchroom.  So, you either brought your lunch from home, went home for lunch, or went without.

Middle and high schools were public; a monthly menu went home with each student, listing what was to be served each day.  My favorite was the meatball sub and the pizza.  Dessert choices were fresh fruit, pudding and jello; baked goods were prepackaged from factories. So, imagine my surprise when I found a recipe for “Lunchroom Lady Brownies”.  Imagine my bigger surprise when I found out that many schools actually made food from scratch!  Discussing this on Facebook, many on my friends list offered up comments on their favorite meals, or separate items, such as yeasty rolls warm and melting with butter.  Be still my racing heart!

Now I can go on and on about former First Lady, Michele Obama, and The Naked Chef, Jamie Oliver, and their campaign to bring healthier, fresher foods to the school lunch menu.  Or how many children go hungry due to not being able to afford a school lunch, or there is just not enough funding for a full-on school meal program.  This is not the time for it, for all I want to do is reminisce good memories.

By the way, there is a site which archives every recipe, for every school lunch item, in the public schools of the United States:  https://archive.org

Lunchroom Lady Brownies is a 50-year-old recipe, supposedly created by a lunch lady in the 1970s, primarily claimed by the South, but other sites state it was Idaho.  After baking, it has a cake-like texture, but as it cools, shrinkage creates a chewier texture.  Whether frosted or not, the brownie itself is fudgy and tasty.

In a large bowl, cream together butter and sugar until fluffy; beat in eggs one at a time, beat in vanilla.  In a medium bowl, sift cocoa with flour; mix dry ingredients into wet until fully incorporated (will form a thick batter).  Mix in nuts if desired.


Smooth out batter into pan; bake 20-25 minutes, or until toothpick, inserted in center, comes out clean. 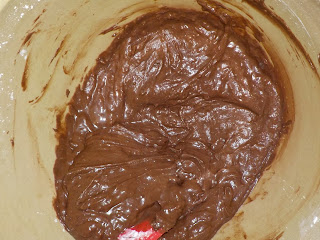 Beat all together until smooth; frost brownies after completely cooled; cut into squares. 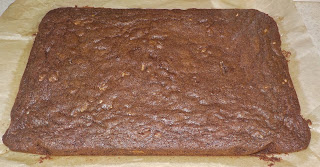 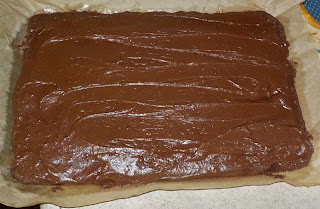 Makes 15-18 brownies, depending on size cut.

For the pizza, the recipe on the archive site is a bulk recipe, so I was able to find a modified version for a smaller version.  In the past, I have made a similar recipe using either store bought pizza dough, or, for a thicker pan-pizza crust, bread dough.

(Original from archive.org: https://archive.org/details/CAT92970475/page/n71/mode/2up which contains recipes used in public schools.  This recipe was modified by Oven & Apron Blog: https://ovenandapron.com/2014/09/28/old-school-rectangle-pizza/)

In a medium sized bowl, stir together the yeast, flour, milk powder, sugar, and salt. Add the oil and stir to combine.

Add the warm water and stir until a thick batter forms (there will still be lumps remaining, that’s okay!). Spread the batter into the greased sheet pan and let the pan sit for 20-30 minutes.

Bake the crust in the preheated oven for 12-15 minutes. The crust will probably pull away from the edges of the pan, and that’s fine too.

When the crust comes out of the oven, sprinkle on 4 ounces of the shredded cheese. Spread the pizza sauce over the cheese, leaving a bit of crust showing around the edges. Sprinkle with the remaining cheese and the minced pepperoni.

Bake the pizza for 12 minutes, until the cheese is melty and the edges are browned. Let the pizza sit 5-10 minutes before slicing into rectangles, two rows of 5 rectangles each. Serve hot! 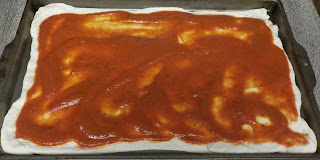 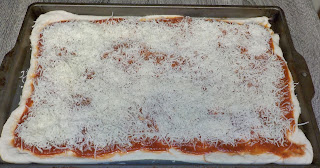 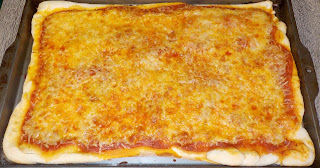 To store any leftovers, layer pieces between parchment paper or foil and store in a zip top bag in the fridge for up to 3 days.

Now, whether you want to have your own lunch room memories revived, or make these recipes for children, grand, even great-grand children; well, have at it!  School’s out for summer.