Bacon, whether it is flavored with maple or honey, seasoned with hickory or apple wood, bacon is yummy goodness and ups the ante on taste for anything it is included in, even dessert. That's right, I said bacon for dessert; even I had my doubts about trying out dessert recipes with bacon in it, but had to try nonetheless. After seeing bacon cupcakes on a few cooking shows, I was curious to how they actually tasted.   I cannot believe how many hundreds of bacon dessert recipes were found on the internet! Which one to choose was a total mystery, so printed out a few, compared notes, and came up with my own concoctions.

Now Roy was not happy about the whole experiment thing at all.  Bacon is bacon and should not be made into candy, or added to cake. He still does not like the idea of it at all, but he did have to agree that my recipes came out pretty well, and he was impressed at my accomplishments. I likened the taste to French toast in syrup, but without the bread; and it was the perfect garnish for the cupcakes.

Hmm, first my Monte Cristo Sandwich mentioned French toast, now this article.  Seems to be a theme developing for a future article on, what else, French toast! 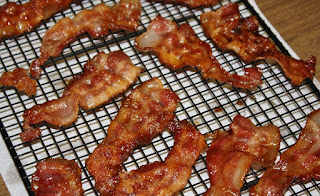 In a large nonstick skillet, on high heat, cook the bacon until it is darkened in color, but still flexible; drain on paper towels.

Alternative: instead of ground cinnamon, use ½ Tbsp. of ground chipotle powder.

Then came the cupcakes, the fat from the bacon gives the cake a moister and richer consistency. The meat of the bacon does cook during the baking process, and it is like a little chewy surprise within the cake...think bacon gummy bears! There is not an overpowering taste of bacon, you know it is there, but it all comes together well. 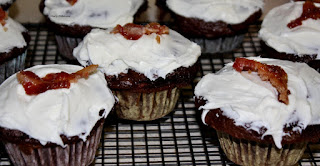 Add in the bacon and mix well with spoon, not a mixer. Fill each paper liner 2/3 with the batter; bake for 20-25 minutes; check for doneness by inserting toothpick in center; cupcakes are done if it comes out clean. Let cupcakes cool before removing from tins and frosting. 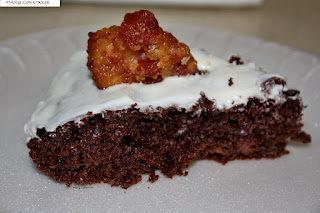 Alternative: divide batter in half between 2–8-inch cake pans which were sprayed with nonstick baking spray. Bake time will be the same as for the cupcakes.

Makes enough for 12 - 16 cupcakes depending upon how much is spread on each cupcake. To make enough to cover the top, sides and in-between 2–8-inch cakes, double the recipe.

Dead set on not transforming bacon into a candy, but still curious on the concept?  There is more to Mr. or Ms. Piggy than bacon, let’s make “other white meat candy”!  Candied bacon becomes a hardened food product that can be eaten as a snack, or used as a garnish on a dessert. This main dish recipe I am giving you is a pork dish with a sauce as sweet as candy, and a perfect enhancement for the meat itself.

"Candied Pork Chops"   Yes, I admit it, I ended up licking any excess sauce off my plate; and while it is probably good for rice or noodles, we much prefer mashed potatoes with this dish. Another point is, while the recipe calls for pork chops, boneless ribs, roast or tenderloin would work very well also.   Hmmm, I wonder how it would be as a glaze and sauce for barbecued ribs?  Looks like another adventure in the making.  Also, this is a great dish for a potluck meal, and with holiday events being planned out, you might be seeing this sometime sooner, than later. 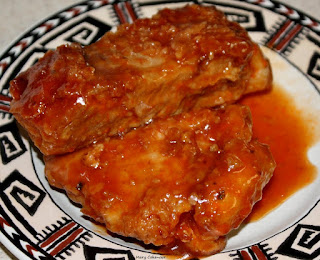 1 cup canola (my preference) for frying

On medium-high heat, fry coated chops five minutes on each side.  They will not be cooked all the way through, but will finish up in the oven.  Drain on paper towels and place into a 9x13 baking pan, or casserole dish.  Preheat oven to 375F.

In a large bowl, whisk together brown sugar, ketchup, and water. Pour sauce over the chops; bake 30 minutes, uncovered.

Posted by Mary Cokenour at 4:01 PM